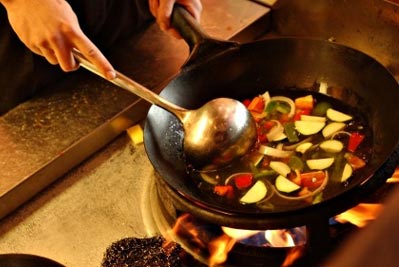 Todd: Hey, Akane, I know that you cook a lot, and I never cook, but it's starting to get really expensive to eat out so I wanna cook more.

Todd: Can you recommend something that is very, very easy for somebody who does not know how to cook.

Akane: OK, well, I'm not the best cook myself but I do cook often for financial reasons because it is cheaper. Um, I would recommend, if you're not used to cooking I would recommend the fried noodles. It's quick. It's easy. It's inexpensive, and yeah, I think you can do it.

Todd: Mm, OK, I probably won't do the meat thing, but for the vegetables, what vegetables do you recommend?

Akane: Well, I recommend seasonal vegetables because the ones in season are always higher in vitamins and nutrients. Right now it's about early summer, late spring so the ones that are good right now egg plants, spinach and, well bean sprouts are good all year round.

Todd: Mm, OK, so assuming I buy all this stuff (right) bring it home, what do I do?

Akane: Well, first you need a good frying pan. (I got that) OK, first you actually need to wash the vegetables and cut them up into small pieces and then heat the pan up with oil and then put the vegetables in first because they take longer to cook than the noodles. After you have seen that the vegetables have gotten slightly brown and soft, then you can add the noodles and mix it up until the noodles are heated up and then just season it with salt and pepper or a sauce that you like.

Todd: OK, sounds pretty easy, but as for the oil, what kind of oil should I get?

Akane: Well, vegetable oil, kanola oil, or olive oil, I think would be the healthiest choices.

Todd: OK, now one problem I have about cooking is, for people who don't know how to cook, how much do you cook? Like you said, chop up the vegetables (Yeah) Do I chop up five eggplants, one eggplant?

Akane: Well, if it's just for yourself, I would recommend just one eggplant and maybe half a bag of bean sprouts and half a bunch of spinach. The vegetables really shrink after you cook them so it might look like a lot when they're raw, but once you cook them. They shrink.

Can you recommend something that is very, very easy to cook?


When you 'recommend' something, you say that it is a good option or a good idea.  Notice the following:

I recommend seasonal vegetables because they are higher in vitamins and nutrients.


'Seasonal vegetables' are what are grown at a particular time of year.  It is what is being produced at the time you want to eat it.  Notice the following:

Well, bean sprouts are good all year round.


'All year round' means for the whole year or constantly throughout the year. Notice the following:


If something is 'heated up,' it goes from being cold to being warm. We usually use this phrase to refer to food or drinks. Notice the following:

Just season it with salt and pepper or a sauce that you like.


When you 'season' something, it means that you add spices to give it more flavor. Notice the following:

475 English Only in Class
Speaking only English in English class.
﻿
INT 4
Akane