English Only in Class

Speaking only English in English class. 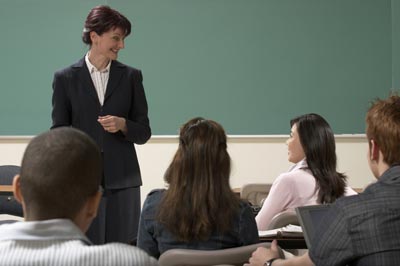 Todd: Ah, so, Ruth, we are both teachers

Todd: And we have students and we teach our students English, and English is not their first language, what do you do in class when students do not speak English? When they speak their own language instead?

Ruth: Firstly, I give them a stern look, although that doesn't always work, then, well, if I'm setting an activity, I always make sure that, I ask them first of all which language they are going to do the activity in, and any student who's not going to speak English has to put their hand up and generally students don't like to be the odd one out so they don't put their hand up.

Ruth: What do you do?

Todd: Um, well, I don't know, I mean, I haven't had much success really, so I've actually been pretty casual about it. I just let them speak occasionally to each other in their own language.

Todd: Yeah, and then, I just encourage that they speak English but I figure as long as their trying to speak in English and they do the majority of it in English, that when they have to speak a little bit of their language, that's OK, I mean, as long as it's quick, and..

Ruth: I really think English should be the only language they speak in class if they're learning English.

Todd: But don't you think that that just too hard, that maybe that actually brings them down, they strain too hard, that sometimes it's just easier for them to communicate really quickly, and then switch back to English.

Todd: Yeah, I guess. Maybe I should try it. I'll give it a try, but it might be too late cause I've already let them, you know, not do it, so!

Ruth: So do you think you might start this week?

Todd: I'll try, but I have to be careful because I don't want to shock them too much.

We teach our students English, and English is not their first language.


Your 'first language' is the language that you speak when you first start talking.  This can also be called your 'native language.' Notice the following:

I give them a stern look, although that doesn't always work.


A 'stern look' is one that is harsh or severe. It is not friendly. Notice the following:

Generally, students don't like to be the odd one, so they don't put their hand up.


The 'odd one' is thing that is different than the others. The students in class don't want to be different from each other or be the one that everyone looks at. Notice the following:

I haven't had much success really, so I've actually been pretty casual about it.


If you are 'casual' about something, you are not serious or strict about it.  Notice the following:

I figure as long as they're trying to speak the majority of in English, then it's okay if they speak a little bit of their own language.


'I figure' is similar to saying 'I think' or 'I believe.' Notice the following:

475 English Only in Class
Speaking only English in English class.
﻿
INT 4
Akane