Marion talks about her experience living in Italy. 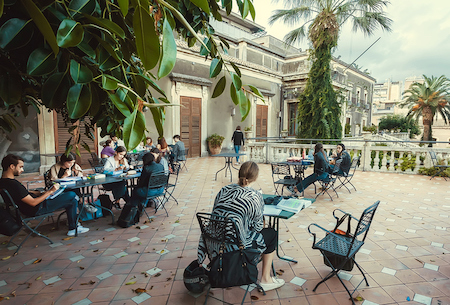 Todd: So, Marion, what countries have you lived in?

Todd: Wow. How long did you live in Italy for?

Marion: Um, for two seperate periods, so a year each so it total about two years. Almost two years.

Todd: Wow, that's pretty cool. So why did you go to Italy? What were you there for?

Marion: I went there to study Italian. The first time I studied Italian and then French, and then the second time I went back after graduating to study more Italian.

Marion: Hmm! It was interesting, yeah.

Todd: So were you classes tough? What it a tough study program?

Marion: Hmm, they were very interesting, and the first time I went, my Italian wasn't so good, cause I had only studied for two years before I went the first time, so even though my Italian improved enormously over that first year, in the beginning it was quite difficult, I had one professor for example, who would constantly say to me, in class, in Italian, "Are you following? Are you following?" so it was a bit intimidating.

Todd: Yeah, I don't think I could do that with my students.

Marion: No, no, it was really awful, he was really singling me out, so all the other people in the class used turn their head around and look at the strange foreigner in their class who maybe or maybe, maybe could understand or maybe didn't, but I just felt very nervous and a bit awkward there because I was just waiting for him to pounce on me, "Mi segue, mi segue!" It's terrible.

Todd: "Mi segue" is "are you following?"

Marion: Are you following me, literally, yeah, basically do you understand.

Todd: Ah, OK. Um, what was life like in Italy, at university. How was it different than say, univeristy in Ireland?

Marion: Well, my university is one one big campus, I think that's maybe the way in America as well. In Italy though, the buildings of the university are spead all over the city, so you'll have for example, the language and literature faculty, where I was, in one part of the town, and then maybe 10 or 20 minutes away by bus you might have the faculty of education where I had to go to some lecturers as well so that was very different, for me to have everything so spread out. Also, the buidlings were so old, you know in Italy there are really old traditional buildings, so they are beautiful, really beautiful, you walk into the faculty building, and there's a huge courtyard, and beuatiful architecture, all around you. It's absolutely amazing. You felt like you were a little part of history, inside you know, so yeah, that was amazing.

Marion: Yeah, it was great, one of the best years of my life.

It was a bit intimidating.

To 'intimidate' another person is to make him afraid of the consequence he will face if he doesn't do what you want.  Notice the following:

If someone 'singles you out,' he focuses all of his attention on you and sometimes directs the attention of other people towards you.  Notice the following:

I was just waiting for him to pounce on me.

To 'pounce on someone' is to attack them verbally or physically.  Pounce is used to describe the way a cat jumps on something it wants to attack. Notice the following:

You'll have the language and literature faculty, where I was, in one part of the town.

'Faculty' can be used to refer to a department of a school or university, or the people within that department.  Notice the following:

That was very different for me to have everything so spread out.

If places are really 'spread out,' they are far away from each other.  Notice the following: