Marion talks about the wonderful food of Italy. 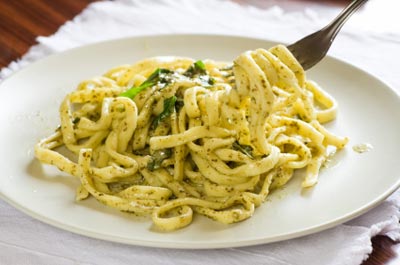 Todd: So Marion, now you lived in Italy.

Todd: And when people think of Italy, they think of food. (Yes) Yeah, and can you talk about the food in Italy?

Marion: Sure, I'd love to. I love Italian food.

Marion: Yeah, well, I suppose everybody thinks immediately of pasta and pizza, right?

Marion: They're the most, the two most common types of Italian food and they are really good, I mean, there's just no comparison I think to the pasta and the pizza that we get in other countries, also the ice cream actually in Italy is just different from any other country in the world I think. They really, they really have the number one on those three items I think. But apart from that, I mean there's a whole world of Italian food and it's all really, really good. I mean, the first time I lived in Italy I lived in Genoa, so that was by the sea. Obviously there is a lot of seafood involved in the cooking. Um, fish stews and that kind of thing and they were really, really good, also that region around Geneoa is where pesto originated, so you know the basil sauce (oh, yeah) Yeah, that from Ligiuriea, which is the area around Geneoa, so while I lived in Geneoa, I think I must have had some form of a pesto dish, at least once a week, but I loved it. It's one of my favorite tastes, actually, pesto.

Marion: Yeah, yeah, you can add it to anything and it tastes great. I put it on my sandwiches sometimes.

Marion: Yeah. Yeah, so Italian food, it's quite difficult tp talk about Italian food really because in Italy there are so many different regions, so all over the country each region has it's own special dish, or special dishes, so the food can really vary from the North to the South, in the north for example, in some areas you can find food that's more like german food or in the south it's more mediteraran like greek food for example. It tends that direction.

There's just no comparison to the pasta and the pizza that we get in other countries.

'No comparison' means that it is impossible or pointless to compare because the pasta and pizza are so much better in Italy than any other country. Notice the following:

You can use this phrase to separate two contrasting ideas, one positive and one negative.  It takes me forever to get to work, but apart from that I love my job.  Notice the following:

There's a whole world of Italian food and it's all really good.

In the example, a 'whole world of food' refers to many options, most of which you probably didn't know about before.  Notice the following:

Obviously there is a lot of seafood involved in the cooking. Fish stews and that kind of thing.

A 'stew' is a very satisfying soup that has been cooked for a long time.  Usually there is a lot of meat and not much liquid.  Notice the following:

Geneoa is where pesto originated.

The 'origin' of a thing is where it comes from.  In this case, where it was first made.  Notice the following: