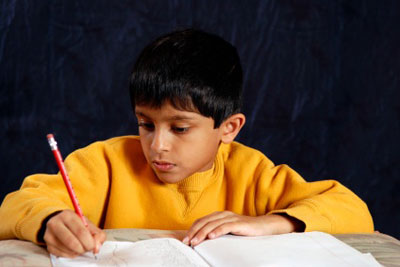 Todd: Nitya, (Yeah) you grew up in India (Yep) In India, what are things that school children like to do for fun?

Nitya: I think playing "hide-and-seek" and I think what all children like in the world, it's the same I guess, because like when I came here in Japan, there was one thing that I was really surprised, I was like, I went with the first and second grade kids one day to their school, and I was shocked that they play the same games which we play back in India, so I think that kids find all over the same things to play (right) I mean like jumping on their one leg and like holding hands and running and "merry-go" and things like that.

Todd: Yeah, it's always the same.

Nitya: All the same.

Todd: Now you went to a school in Japan, now you live in Japan, is school the same in Japan as it is in India?

Nitya: No, it's totally different there. The education system. The things. The whole administration, it's just very different from India I guess, yeah.

Nitya: Yeah, like, the first thing is like, here one period is ninety minutes, but there we have 45 minute periods only.

Nitya: Like in the class system, and here it's like, even though if it's a quarter a system, you take a subject and you learn it only for two and a half months, but the same subject if it's back home in India, we do it like for one year, or six months so the length and the depth is more than here I guess.

Todd: Now in India, in let's say primary school, or elementary school, normally how many students are in a class?

Nitya: Primary school is like 30 students, 30 or 35, but keep increasing as you go to secondary, and it goes up to sometimes 60, yep.

Todd: Wow. Now in your town, in your village, is instruction in English or is it in another language?

Nitya: OK, like, though it's a small town, but we have a university with the second largest in India area wise in the whole world, (Wow) so I studied there my whole education and was there up to my high school, but then later I went to southern part of India for 4 years education

Todd: Uh-huh, and so the instruction was in English?

Nitya: In English and in Hindi, both because they are central government schools, so it's supposed to be in English.

Nitya: On the whole it turns out to be back in mother tongue when we speak in school and everything, but the teachers do give instructions in English.

Todd: OK, and how about, even to a Japanese school, what about school lunches? Like what do kids eat for lunch at a school in India?

Todd: And how do they eat lunch? Is there a cafeteria? Do they bring a lunch?

Nitya: I think most of them bring lunch, and the cafeteria is supposed to be considered unhygienic by mothers, so they are not very favored towards cafeteria food, but we love it, because there are so many snacks and oily things which usually kids like, you know, spicy kind of things with mothers always against it, so we do bring lunches, sometimes we take it back, or eat it in the cafeteria, or give it to somebody, things like that.

Todd: Well, in India, what is a typical lunch, that a mother would make for her children?

Nitya: OK, it is usually Chapatti, which is made by wheat flour, and some kind of, stew kind of thing, or you know, like potatoes, vegetables kind of thing.

Todd: Right, you said, Chapatti? (yeah) What is a chapatti?

Todd: It's a thin round piece of bread.

Todd: And is there something on it, or in it?

Nitya: Yeah, we eat it with some potato curry, or things like that.

Todd: Is the curry on the outside or the inside?

Nitya: No, it's separate.

Nitya: You eat it this with this.

I was shocked that they play the same games which we play back in India.

If something surprises you or is very unexpected, it makes you feel 'shocked.'  Notice the following:

The whole administration, it's just very different from India.

'Administration' in a school setting refers to management of the school.  It can refer to members of the administration board as well as the management structure.  Notice the following:

In English and in Hindi, both because they are central government schools.

In mother tongue when we speak in school.

Your 'mother tongue' is your native language.  Notice the following:

And how do they eat lunch? Is there a cafeteria?

A 'cafeteria' is a type of restaurant where all the food has been prepared in advance and you ask for the food you want and get it immediately.  Usually you carry your food to your table on a tray.  Notice the following: