Nitya talks about the Ganges River. 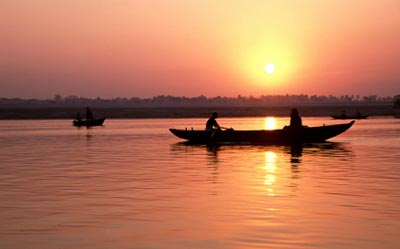 Todd: Nitya, now in India, the Ganges river is very famous. Why is the river so famous in India?

Nitya: I guess most reason because, the Ganges River's origin is from Himalayas and it's considered very pure because it's basically by the melting of the ice by the Himalayas, and it's, the whole 12 months and 24 hours flowing river, I mean, it's, there's no time in the whole year that it dries up and people say the Ganges River dries up, it's like throughout the year, the river is there, and water is there, the water level is maintained and it's considered wholly because of the religious reasons I guess because they say in Himalayas, there was a Shiva there and this Ganges river origins from his head, (Oh, I see) Yeah, so this is...

Todd: And Shiva is a very famous God.

Todd: So, you said that the river comes from glaciers or from ice from the Himalayas, so is the river super clean?

Nitya: Super clean I guess, when it starts from there but by the time it reaches the land, I don't think it's super clean.

Todd: Does the river have a problem with pollution?

Nitya: I guess so, because it's, it's usually, like, like all the cities which are on the bank of this rivers, I guess this problem is all over not only in Ganges River because there no infrastructure about this cleaning environment so much, still not in action. There are so many schemes from the government, but the actions are not taken.

Todd: Well, that's the same everywhere in the world.

Nitya: Yeah, but it's a little too much in India because, first thing, there are still a lot of standard problems which are to be solved in India, rather than these things, there are people still dying out of hunger, so a country who has, which has still people who don't get one meal a day, I think they got to look at that first, and then look at anything else, so people have very different way of opinions on these issues (right) so, yeah

Todd: Well, actually, just recently in America, with the hurricane that we had, it was the same thing. It was very eye-opening about many people that are in poverty.
Nitya: Exactly.

Todd: Yeah, now back to the river, people bathe in the river, is that correct?

Todd: Now is it wholly or is it just a routine thing?

The Ganges River's origin is from Himalayas and it's considered very pure.

If a river is 'pure,' it is not contaminated by other things and not polluted.  We can also use this to describe something that is natural or unchanged by anything else.  Notice the following:

It's considered holy because of religious reasons.

A 'religious reason' is a reason that comes from a person's religion or faith.  Your religion is your spiritual belief.  Notice the following:

I guess this problem is all over not only in the Ganges River because there no infrastructure.

'Infrastructure' is a framework or system that supports something.  This usually refers to a building or a social system. Notice the following:

There are so many schemes from the government.

A "scheme" is a plan, but is usually a dishonest or tricky one.  Notice the following:

It was very eye-opening.

If you see something 'eye-opening,' it makes you aware of something you didn't see or weren't aware of before.  Notice the following: