Aaron talk about a time he had to deal with a hand gun at his night club. 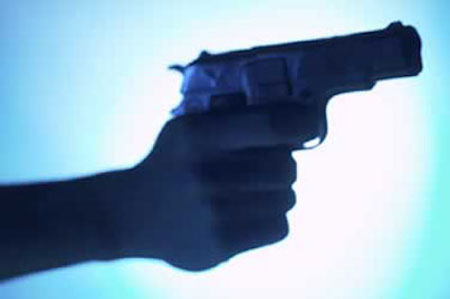 Todd: So you said somebody pulled a gun on you once.

Aaraon: Yeah, well, what happened was that I was working the side door with a friend, good old Brent, the loose cannon as it were, and someone said, "Oh, my God, Oh, my God and we were scared so we had, one of had our radios on, so we radioed inside, get outide quick, go over and there's a cowboy, who has reached inside his truck and pulled out a hand gun and is fending off four or five other guys.

Aaron: Whoa, what the heck is going on? And these guys are pretty keyed up about it. And so I tried right away to get the other guys to back off to try and calm this other guy down. Brent was doing the same, kind of eyeing the gun thinking they might be able to go for it and then one of the guys that was crowding the guy with the gun took a step forward and the guy shot him

Todd: He shot him!

Aaron: Well, hold on. And this is where it all went to hell in a hand basket. It was a bee-bee gun. So this guy reached into his truck and pulled out a bb-gun. Very real. It looked like a 9 millimeter, and then bang. He was surrounded by four or five guys. He figured he'd hold them off but, the guy was hit in the chest, and he looks down, thinking to see blood and he sees this little ball in his leather jacket. He picks it out and then all of a sudden we've got five really angry men and one scared cowboy because now the fear is off.

Aaraon: It was a heck of a tussle, but yeah.

Todd: So did they beat up the cowboy pretty bad?

Aaron: Well, we tried to prevent as much as we could. We kind of backed in a cirlce around him. Even though we were angry at him as well. We knew if we let it go, the man would be dead. Yeah, so we backed up around him, trying to keep the guys off, they got a couple punches in but within about ten seconds, the other bouncers were outside, so that's what's handy about being a bouncer, is if you got a good team, it really is a team. You watch your boys back, so if something goes down, you're searching and you're looking and you're running, which I think a lot of people don't see.

pull a gun on somebody

Did you say somebody pulled a gun on you once?

To 'pull a gun on somebody' you take the gun out of the place that it is hidden and you point it at someone like you are going to shoot him. Notice the following:

I was working the side door with a friend, who's the loose cannon, when it happened.

A 'loose cannon' is someone with unpredictable or uncontrollable behavior. People who are loose cannons frequently say or do things that they shouldn't Notice the following:

These guys are pretty keyed up about it, so I tried to get them to back off.

People who are 'keyed up' are anxious or excited about something. A group of keyed up people will be kind of edgy and ready for something bad to happen. Notice the following:

He was kind of eyeing the gun, thinking he might be able to go for it.

When you 'eye' something, you look at it in a nervous, excited or interested way. Notice the following:

go to hell in a hand basket

Now, this is the part where it all went to hell in a hand basket.

If a situation rapidly gets worse or heads for a complete disaster. Notice the following: