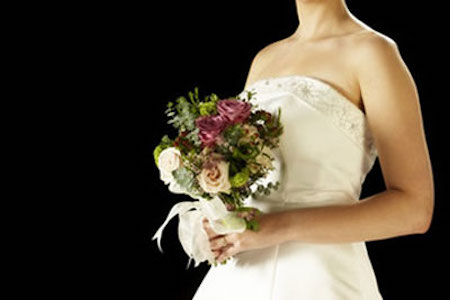 Wendi: So you were saying that your sister looked really beautiful?

Wendi: Can you tell me a little about what she was wearing?

James: Yeah, she was wearing my mother's original wedding dress that my mum made in like the 1960's so it was a real, English 60's-style lace and silk dress, a long train that went about two meters back. She had all her hair pinned up. She spent about an hour at the hair dressers before, a couple of hours before the wedding, and then an hour doing the make-up and then the last thing to go on was the wedding dress and then she came down the stairs and she just looked absolutely stunning.

James: She had flowers sort of sewn into her hair.

James: And obviously my brother-in-law, the husband, he was another. At his friend's house, spent the morning getting ready in his tuxedo and his suit, me as well, but then I had gone back to see her and she wore little silk slippers but because it was raining she had to wear her trainers to walk from the car to the church and then get changed back into her silk slippers to walk down the aisle. Yeah, and then she had her huge bouquet of flowers, which generally were just white and pale colors to go with the dress.

Wendi: That's really amazing that your sister wore mom's wedding gown that your mother made. That is so cool.

James: And it was a beautiful, beautiful dress.

Wendi: It must have been so tiny though cause women were so much more slender it seems like back then.

James: My sister is very little

James: She's only five-foot-two. So it fitted well. You wouldn't have know it was made for someone else. I'm not sure if they adjusted it but I think it just fitted. And it was, it was a really beautiful dress. My mum, that Sixty-style anyway is very much my sister's style and the style that was in England at the time.

James: So it worked. It really worked well.

Wendi: Of all the wedding's you've been to, do you think there is a pretty consistent kind of style of what you wear as a guy or as a woman?

Wendi: What would you describe it as being?

James: White. Well, for the bridegroom or?

Wendi: For the people coming to the wedding.

James: Yes, they can't wear, women cannot wear a similar color to the bride so if the bride is in white, no white. I noticed, in Japan, they wear black. In England you wouldn't wear black to a wedding, because it's associated with funerals.

James: And generally, with women and weddings, the women try to get the nicest dress possible or a nice little suit, like skirt and blouse and top. Men, it's just a suit and generally a bright tie or a bright shirt, not too dark, but black or blue pin-stripped suit but as long as it's a suit it's fine.

My sister wore our mother's original wedding dress, which had a long train.

The 'train' on a dress is the long part on the skirt that gets pulled on the floor behind a woman when she walks. Notice the following:

She spent about an hour at the hairdressers to get her hair pinned up.

When you 'pin your hair up' you put it up on your head with metal clips to hold it in place. Notice the following:

When she came down the stairs, she just looked absolutely stunning.

Something 'stunning' is really, really beautiful. We usually only use this word to describe women. Notice the following:

She also had flowers sort of sewn into her hair.

You 'sew' something when you attach one thing to another using string or thread. Here, the flowers were connected to her hair with thread. Notice the following:

It seems like women were so much more slender back then.

'Slender' is another word for thin. Notice the following: