Why people get married?

James and Wendi discuss the idea of marriages and why people have weddings. 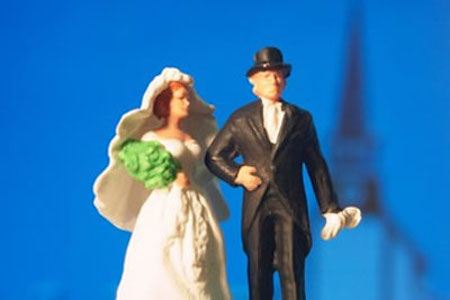 Wendi: What is the point of getting married or having a wedding or? I guess there's not really one in the same but what's the whole point?

James: Generally, I think people get married because they've been in a relationship for long time and they feel it's what society wants them to do.

James: But also I think in terms of having children, having a son and daughter, it's possibly important to have the wife and husband married, sorry, the parent married to bring up the children together, but increasingly so in England people are not seeing marriage as so important. More and more it's just, people have been together for five or six years, then, they ask, "Do you want to marry me?" cause they've been together for five or six years.

Wendi: Given the increase in divorce. It's sitting at I think 50% in Canada and where you're from, England, do you think marriage is outdated?

James: I don't think it's necessary anymore. I think people only do it because people have done it for hundreds and hundreds of years. It's not to do with religion. It's not to do with law. It's to do with just culture and yeah, perhaps it's out-dated and more and more of my friends won't get married because they have a wonderful relationship and then as soon as they get married, it seems like then it is able to end. It's like marriage is split-up, whereas relationships might not have ended. There's more pressure once your married.

Wendi: So if you think, well if you could kind of imagine in your mind the concept of marriage and what it is, has caught up to where we are today, what would the evolution of marriage sort of become?

James: The evolution of marriage has become just living with your partner because essentially people got married so they could live with their partner right and raise a family together. Now in today's culture, today's society you don't need to be married to do that. It's perfectly acceptable. I'm still slightly old-fashioned, I guess, in that I would want to be married before I have children, but there's not reason for that other than I'm still slightly old-fashioned and most of my friends are five years younger than me would not care, one way or the other if they are married or not before they had children.

James: And essentially, I think people like marriage because it's a nice day. It's more I think for women. Women in England, I'm sure it's the same in Canada, dream of their wedding day, since they are little girls and they want that day to remember and they want that special day. For men, more I think, it's just about making their mothers and their wives happy and they like a nice party.

What's the whole point of getting married or having a wedding?

When you ask about the 'whole point' of something, you are asking what the purpose is. Why would someone do it? Notice the following:

It's important to have the wife and husband married to bring up the children together.

'Bring up' is another way to say 'raise.' When you take care of children from the time they are young until they can care for themselves, you can say that you are 'bringing them up.' Notice the following:

Divorce has increased, like in Canada where it's sitting at I think 50%.

Here, 'sitting at' can mean that the rate hasn't noticeably increased or decreased; it just stays around 50%. It can also just be replaced with 'is at.' Notice the following:

I think it's out-dated because I find that many people only do it as a matter of culture.

Something that is 'out-dated' is old-fashioned. It was popular in the past, but times have changed and it doesn't fit with the world as it is now. Notice the following:

Can you imagine what the evolution of marriage would become?

The 'evolution' of something is how it changes over time. It can either change naturally or because of external forces. The verb that goes with this noun is 'evolve.' Notice the following: