Anita asks Todd about his time in Prague and what he thought about her city. 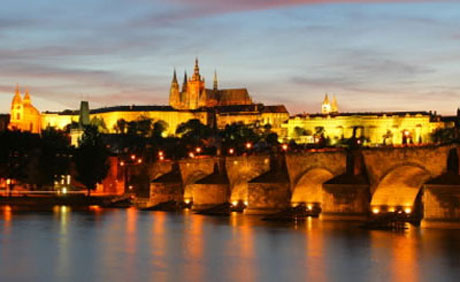 Anita: Well, Todd, since you've asked me about San Francisco, tell me, have you ever been to Prague?

Todd: I have been to Prague. Actually, I lived in Prague for about a week, or two weeks.

Todd: A long time ago.

Todd: Right out of college.

Todd: Well, it was great. It was one of the first European cities I went to, and it was so different from America, and I thought the architecture downtown was really beautiful.

Anita: So what was your first impression when you got there?

Todd: Well, when I first got there, I had no place to stay, and this young kid came up to me and convinced me to live in his house.

Todd: So they... his mother was renting rooms to foreigners, so I lived with a Czech family for about ten days.

Anita: Really, so did you eat Czech food?

Todd: I did, but you know I don't remember anything about it. It was so long ago. It seemed really good though.

Anita: I guess. I like it. So what did you do in Prague? What did you see there?

Todd: Well, of course I went to the downtown area which had the castle and the bridge and lots of the old buildings, and I just took local transportation. I took the... I guess it's not a subway or...

Anita: It is. You can call it a subway. We call it the Metro.

Todd: Yeah, I took the Metro to different places and I took buses and just walked around the city and I had a good time.

Anita: Did you find it cheap or expensive compared to the States?

Todd: Well, it was really cheap, but at that time I was working in Europe and I had no money, so I still was very poor.

Todd: Yeah, so now... I was in Prague, you know, 12 years ago. Do you think the city changed a lot since I was there?

Anita: It's changed very much. I guess since the fall of Communism in 1989, the city started changing at that time and it's still changing. It's become very modern. Of course the historical parts are still preserved. You're not allowed to build skyscrapers or very tall buildings. It's good because after the fall of Communism a lot of the buildings were renovated, so the whole city looks like it's new. It's old new.

Todd: Yeah, I remember, the city almost looked like a museum because the buildings were just so pristine and perfect.

Anita: Yeah. It's... I personally just love walking through the streets. You can never get tired of that.

Todd: Well, hopefully I can go back again someday.

I lived in Prague for two weeks right out of college.

When we are 'right out of' a place, that means we have recently finished a long term commitment.  Notice the following:

What was your first impression of Prague?

A 'first impression' is the opinion we have of something when we first see it, or of a person when we first meet them.  Notice the following:

A young kid came up to me and convinced me to live in his house.

We 'come up' to somebody, meaning we approach them, to start a conversation.  Notice the following:

I took the local transportation to see the old buildings.

Metros, buses and taxis are examples of 'local transportation.'  Notice the following:

Those old buildings were just so pristine and perfect.

A 'pristine' old building is clean and in the same condition as when it was new.  Notice the following:

right out of • first impression • came up
transportation • pristine