Asako talks about going from living in a big city to living out in nature. 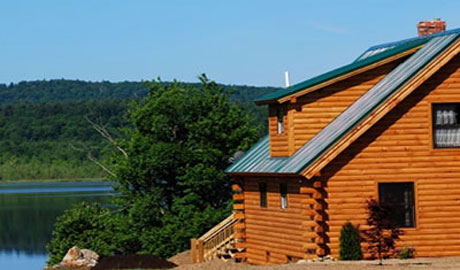 Todd: So, Asako, we are talking about your time in Alaska. Now you are from a major city in Japan, correct?

Todd: So, what was it like going from a big city in Japan to way out in the wilderness in Alaska?

Asako: Do you know what? A lot of people think I had problems, many problems, but actually I did not. I just loved it. I did not have any problems.

Todd: So maybe, by nature, you are actually more of a nature person.

Asako: Exactly. So when... actually when I had problems, was when I came back to Japan, back to the big city in Nagoya. Then I had a lot of problems.

Todd: You missed the wilderness?

Asako: I missed silence. Quiet. I... just too many, too many sounds in the city. Even when you're sitting in your room, you still hear some sort of sounds, noise, surrounded by some sort of noise all the time, and I just couldn't stand it. It took me a long time to get used to.

Todd: You know that's kind of interesting because I grew up in a small town and then I moved and I lived some major cities: London, you know, Tokyo, and I lived in Bangkok and when I would come home from being in Bangkok, Thailand, I was so used to having people around all the time, it was really hard to have too much space.

Todd: It was too much, like I missed having action and noise around me all the time.

Asako: So you are a city person?

Todd: You know, it's funny, oddly enough, I grew up on a farm and in a small town and I actually think, Yes, I am more of a city person.

Todd: Maybe it us just the difference.

Todd: So would you like to move back to Alaska some day?

Asako: I have tried. I couldn't catch any.... well, fish yes, but I couldn't shoot anything, but I tried.

Todd: You tried to shoot?

Asako: Shoot. I did.

Todd: You didn't hit anything?

Asako: I was really bad.

Todd: Well, I am sure, out there, there's some animal that's very thankful you're not good at hunting.

Asako: I'm sure they were.

way out in the wilderness

What was it like way out in the wilderness?.

The 'wilderness' is a large green forested area of mountains, trees and wild animals.  It is usually an area that has been undeveloped by humans.  Notice the following:

So by nature, you are a nature person.

If you are a certain way 'by nature', that means you were born that way.  Notice the following:

I just couldn't stand it

And I just couldn't stand it.

When we 'can't stand' something that means we strongly dislike it.  Notice the following:

I missed having action and noise

I missed having action and noise around me.

We 'miss' something positive from the past that we want to do, see, or have now, but can't.  Notice the following:

Oddly enough, I grew up on a farm.

We use the term 'oddly enough' to talk about something that is strange or surprising.  Notice the following:

wilderness • by nature • stand it
missed having • oddly enough