Eoin has a gig to get to. He talks about what mode of transportation he will use. 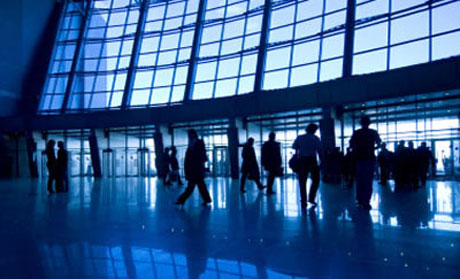 Todd: So, Eoin, you said you are going to Osaka tomorrow night.

Todd: Oh, you're taking the ferry?

Todd: Oh, wow. Why did you choose the ferry?

Eoin: Because previously when I've been up to Kansai, we caught a night bus, but it's not that comfortable on the night bus. You can't talk and difficult to go to the toilet even. On the ferry, there's a lot more space to move around. You can go to sleep when you want to. There's also a bath, so you can wash before arriving.

Todd: Right. Actually, I took the ferry once to Osaka. I thought it was great. I preferred it. But you could have taken the train?

Eoin: I could have taken the train but it costs considerably more than the ferry so I went for the cheaper option.

Todd: Right. It is expensive. How much was the train to...?

Eoin: The train to Osaka, I believe it was somewhere in the region of 20,000 yen.

Eoin: On the shinkansen, which is the bullet train.

Eoin: That was one-way I think.

Todd: Well, how much is the ferry?

Eoin: The ferry... with the internet booking discount that I got it cost 7,000 one-way.

Eoin: Yeah. I think there's other ways of getting it cheaper. There's some kind of members card that you can enlist for which is pretty cheap. Unfortunately, I'm going to be pretty tight for time when I arrive at the ferry port so I'm not sure if I'm going to be able to sign up for it and get the extra discount or not.

Todd: Right. Right. Well, actually when I went, I guess the cheap ticket, you have to sleep in that big room, right.

Todd: The sleeping area. It makes you feel like an immigrant. You know, people coming to America or something for the first time.

Eoin: Yeah, I actually quite enjoy that in some ways,
It's more social than having your own cabin.

Eoin: And I'm going up there with my band so we spend a lot of time together. It's always nice to meet a few different people on the way up.

It costs considerably more than the ferry.

The word 'considerably' has the same meaning as 'a lot'.  Notice the following:

somewhere in the region of

Here, the phrase 'somewhere in the region of' talks about an amount of money without being exact.  Notice the following:

Something that is 'not bad' is OK.  Notice the following:

There's some kind of members card.

In this case, the phrase 'feel like an immigrant' makes reference to immigrants to America around the late 1800s, early 1900's.  Notice the following: