Eoin has a gig coming up. He talks about what life is like when playing on the road. 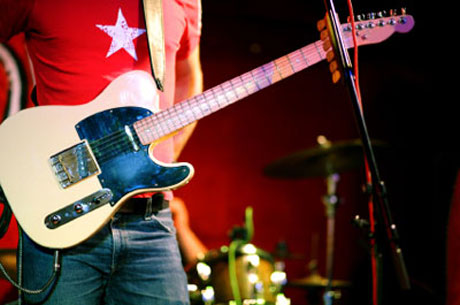 Todd: So, Eion, why are you going to Osaka?

Eoin: I'm going to Osaka this weekend to play a couple of gigs, with my band.

Todd: A couple of gigs.

Eoin: That's right. I guess you might say concert rather than gig.

Eoin: One of them is in Osaka on Friday night and the next one is in Nagoya on Saturday night. They're both at relatively well-known live houses, which is a main kind of live venue for rock bands in Japan.

Todd: Oh, wow. That's pretty cool that you're going to be playing at a reputable place.

Eoin: Yeah. I mean, it's not, you know, world famous bands don't tour and play at these places but on the scene, they're decent places with decent sound systems and fairly well established.

Todd: Now, when you go to these places do you have to take all of your own equipment?

Eoin: Not all of our own equipment. In fact, compared to playing in England, we have to take relatively little. I play base so I will bring my base and just affects but use the base amp that's already there in the live house.

Todd: Now base, do you mean... is that the guitar?

Todd: OK. So you just have to bring the guitar and the cables?

Eoin: Cables and the affects pedals. I use some affects to change the sound of the base guitar when I'm playing and so I just bring that and plug it into the live house base amp that's there.

Eoin: Yeah, and... I mean, on top of that, the PA is all there and normally quite big, the main speakers that all the sound mixed through. If we were to play a gig in England or when we have played gigs in England, the standard is there's only the PA. Those speakers there. Everything else including the drum kit, the guitar amp, the base amp, which are pretty big items of equipment.

Eoin: Yeah, you have to bring all of that with you and normally four or five bands will be playing together on any given night so there'll be an arrangement, Everyone will get in contact beforehand. One band will bring a drum kit. One will bring the base amp. Another band will bring guitar amp. That sort of arrangement.

Eoin: Well, in theory if you can get in contact with the other bands in advance, that's the way it would work.

A couple of gigs

He is going to play a couple of gigs.

Here, a 'gig' is a live performance by a band.  Notice the following:

You're playing at a reputable place.

A 'reputable' place is well-known and respectable.  Notice the following:

He will be using the bass amp.

The 'bass amp' is an amplifier for a bass guitar. An amplifier creates sound for electric instruments.  Notice the following:

The PA is all there.

The 'PA' amplifies a singers voice.  Notice the following:

on any given night

Five bands will play on any given night.

The phrase 'on any given night' is similar to the word 'anytime'.  Notice the following:

gigs • reputable • bass amp
the PA • any given