Eoin talks about the usual routine of playing on tour with his rock band in Asia. 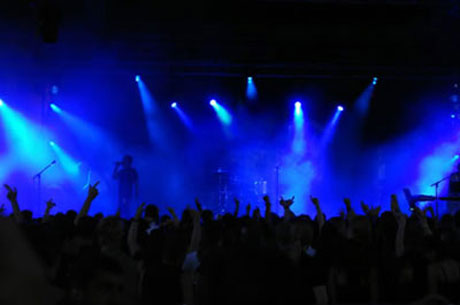 Todd: So, Eoin, we're talking about you playing this weekend. You're going to play in two cities. What's the set-up like? What's the routine like when you go to a club? Like how soon must you be there? You know, how long do you play, etc.?

Eoin: Yeah, there is some variance from place to place about that but generally it's pretty standard that if you're playing that evening, you'll need to be there about maybe two, one or two in the afternoon just to... especially if it's a place you haven't played before to go and greet the... or say hello to the owner of the live house and then do your rehearsal, your sound check to get... make sure all the volumes are correct and normally there's some paperwork to fill in, like list out the songs you're going to play, copy for the lighting people, and copy for the sound guy on the sound desk, and plus if there's people coming to see you and they want to reserve advance tickets, you need to write out a list and give that to the reception guy and then apart from that... yeah, that's most of the preparation done, so normally, you'd go in, greet their live house manager, rehearsal, after that have a bit of free time and the events normally start around 6:30, 7:00 in the evening, and each band plays for about half an hour normally.

Todd: That's it. Only thirty minutes.

Todd: All that work for only thirty minutes.

Todd: That must go by so fast for you?

Eoin: Yeah, it does, but in an ideal world it would be nice to just play for hours on end but I've seen bands play for hours on end, especially bands that I never heard the music before, and I think it's too much to take in. You know, for... if you're a listener, taking in much more than half an hour of brand new music from one band at one time is a lot. I think it's a good length of time to perform if you're not a really well known band.

Todd: Well, for you though, does the time just fly by?

Eoin: Yeah, it feels pretty fast but I don't know. It's a rush, you know. It's a buzz to play and even though it's short, it's enjoyable as many things in life are.

The 'set-up,'in this case, is the arrangement or layout of the place where the concert will be given.  Notice the following:

There is some variance.

The word 'variance' talks about the amount or degree of difference between two or more things.  Notice the following:

Here, the term 'pretty standard' describes what is usually required or what is normal.  Notice the following:

Bands attend a 'sound check' before a show to make sure volume levels are suitable for a particular venue.  Notice the following:

In an ideal world.

In an 'ideal world,' everything would happen the way we want or expect.  Notice the following:

Does time just fly by?

'Time flies by' means that time seems to move very fast. We usually experience this feeling when we are having fun.  Notice the following: