Eoin talks about his fan base and what he does to keep them involved with his music. 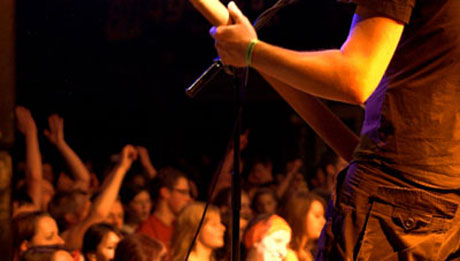 This conversation is continued from #817

After the Gig. Eoin is talking about what happens after one of his performances with is band.

Todd: So, usually, do people come up and talk to you after the show, or are people usually kind of shy and they don't know how to approach you?

Eoin: Yeah, so that's another thing. I mean we have a CD stall and some people are very forward and they'll come and instantly like rush up and buy a CD but I think in Japan, especially it seems like people are kind of shyer about approaching you so giving out a questionnaire and asking people write it, it gives them an excuse to come up and talk to you anyway if they're interested later. So yeah, whenever we've given out questionnaires, it seems like we sell more CDs on those days.

Todd: Then you just actually pass this out to the audience?

Eoin: Yeah. Normally there's not that huge a number of people there, maybe forty or fifty people.

Eoin: Maybe a few more. It depends on the night. So this is... what I'm describing here is for a gig that's sort of away from home, you know. We played a concert just recently in Oita where we live and that was more of an event that we organized so we pretty much knew most of the people who had come anyway. In that case we played for longer, didn't do the questionnaire thing and just went out drinking after the gig. It was a more relaxed event on the night and afterwards but of course preparing for it in advance required a lot more effort - making sure people came and calling other bands to come and play with us and that sort of side of things.

Todd: So do you have a fan base? A big fan base?

Eoin: I wouldn't say it's massive but, yeah I guess when we play in Oita normally somewhere between, on a good day maybe 35, 40. On a bad day 15 to 20 people will come and see us.

Eoin: But, I mean, that's more, you know, we have to pro-actively contact them and say "Hey, you wanna come and see the band?" It's not like we just put an advert in the paper and everyone turns up, unfortunately.

Todd: Well, hey, you know. Give it time.

We use the term 'another thing' when we want to add more information to something we've just said.  Notice the following:

They'll rush up and buy a CD.

When people 'rush up,' that means they quickly approach us.  Notice the following:

On a bad day

'A bad day' is one that doesn't go the way we want or had expected.  Notice the following:

To be 'pro-active' means to act rather than react to events.  Notice the following:

We just put an advert in the paper.

'Advert' is a short form of the word 'advertisement'.  Notice the following:

another thing • rush up • a bad day
pro-active • an advert