Mike talks about a good work out routine for building arm and torso strength. 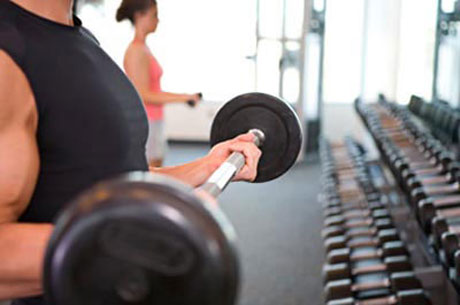 Todd: OK, Mike, you are fit, and you got me motivated. I want to work out, so I thought I would ask you about a work out routine, so first let's talk about upper body? What should I do for my chest and shoulders?

Mike: Well, the first basic chest work-out is the bench press, where you use the straight bar, and you should probably do three sets, if you're starting out: three sets, doing ten reps each set.

Todd: OK, three sets would mean I do it three times with rest in between, correct?

Todd: And how much time should I rest between each set?

Todd: OK, and then when I do each set, so you say I do ten reps, that means I lift the weights ten times?

Todd: OK, and I should do heavy enough weight that I can only do it ten?

Mike: Yeah, you should lift weight that is heavy enough to where you can only do it ten times.

Todd: OK, so, that's gonna build my chest and my shoulders?

Mike: That will build your chest.

Mike: Well, a good one is the military press which, there's usually good machines for that, where you sit down and you just press the bar above your head.

Todd: OK, so you think it's better that I do this on a machine than free weights?

Mike: Yeah, if you're just starting out, I think you should do it on a machine. It's probably safer. You can get the motion down and then it puts less strain on your back.

Todd: OK, and when I do this, again I should do it about ten reps?

Mike: Yeah, about the same.

Todd: OK, now when I lift should I do it like really quick and fast or like slow?

Mike: You should bring weight down slow and explode up.

Todd: Oh, so I lower the bar slowly and then push up as quick as possible?

Mike: Yeah, and you do that ten times.

Todd: OK, so we've got my chest workout, we've got my shoulder work-out. What about my arms? I want big arms, Mike. I want guns.

Mike: Well, for arms, there's a lot of good exercises, usually for your biceps, the basic would be dumbbell curl, or straight bar curl, which you use the large straight bar, so you just stand and hold the bar in front of you, and just bring it up towards your chest.

Todd: OK. Is there any dos and don'ts about lifting the bar, like things I should be careful of?

Mike: Just make sure that your back is straight and that your stomach muscles are tight so that it keeps you solid.

Todd: So, I need to keep my torso, my chest, very straight and not move to much?

Todd: OK and the same as before: ten reps?

Is it better that I do free weights?

In a gym, 'free weights' are those heavy round metal things that look like donuts. The opposite of free weights are machines.  Notice the following:

You should explode up.

When we exercise, to 'explode up' means to lift, push, or pull something very fast.  Notice the following:

Here, 'guns' is an idiom for big, strong arms.  Notice the following:

For your biceps, do curls.

A 'bicep' is the large muscle on the front of your upper arm below the shoulder.  Notice the following:

I need to keep my torso straight?

Our 'torso' is the middle part of the body that includes our stomach and waist.  Notice the following:

875 Wish List
Rebecca talks about things she wishes she could do.
﻿
INT 5
Rebecca/Todd

871 Upper body workout
Mike talks about a good work out routine for arms and chest.