Paul and Katia debate the merits of giving money to charity or people in need. 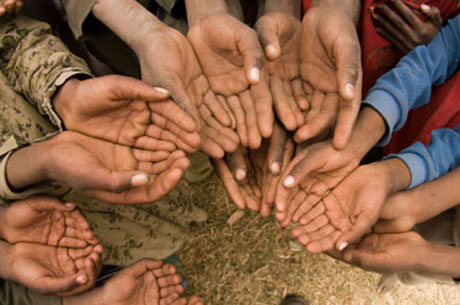 Paul: Hi, this is Paul from England speaking with Katia from Mexico. First question is do you give money to charity?

Katia: Well, Paul, it's a difficult question because you really want to help people, but I always question myself where if the money really gets to where it's supposed to go, so personally I rarely do give money to charities. I'd rather give my time, so I know if it's actually something happening. What about you?

Paul: Yeah, I guess that makes sense. If it's a registered charity then I don't see there's a problem really with giving a donation.

Katia: Yeah, I guess so, but really I wonder. There are so many charities in the world, and you wonder really how much money do the people actually get, so it's difficult to really know.

Paul: How about if you're walking down the street and you see a homeless person asking for money?

Katia: Homeless people! That's also difficult because you can see they need money or they need food. Sometimes I feel if you give money, you are supporting their way of life so I would rather give some food so they can eat, but maybe if it's a disabled person, I am more willing to give, rather than just the homeless.

Paul: Yeah, I'd agree with you. It's difficult to know what they're gonna use the money for, so usually I never give money to men but if it's like an elderly woman, I'm happy to give a small donation.

Katia: Why not men and only women?

Paul: Well, going back to what you said about supporting their way of life, I mean, not in every case, but I think that often it can just be man's choice to be homeless on the street and he does have a chance to get a job I think.

Katia: So you think the woman really doesn't have a choice, and the man...

Paul: I think it's more difficult for a woman.

Paul: For sure. Do you give money if you see children on the street?

Katia: Well, it depends, because that's also giving money to children so they can continue asking for money, so I avoid it. I also avoid it. What about you?

Paul: I'm a little bit reluctant to give money. I heard in a lot of poor countries that it can actually even be a business, like a parents will send their children onto the street.

Paul: OK, so maybe you like what you said before: it's better to donate your time than to donate money.

I always question myself.

When we 'question ourselves,' that means that we are not sure if we are making a good decision.  Notice the following:

I guess that makes sense.

When something 'makes sense,' that means we understand and agree.  Notice the following:

If it's a registered charity then I don't see there's a problem giving a donation.

A 'registered charity' is an official group or organization that gives money, food, shelter or healthcare to the poor.  Notice the following:

supporting their way of life

I feel if you give money, you are supporting their way of life.

When we 'support someones way of life,' that means we help them live as they choose.  Notice the following:

If it's a disabled person, I am more willing to give.

'Disabled people' might not have the physical or mental abilities of most people.  Notice the following:

I'm a little bit reluctant to give money.

When we are 'reluctant' to do something, that means we do not want to do it.  Notice the following: