Paul and Katia discuss the difficulty of lending money to friends. 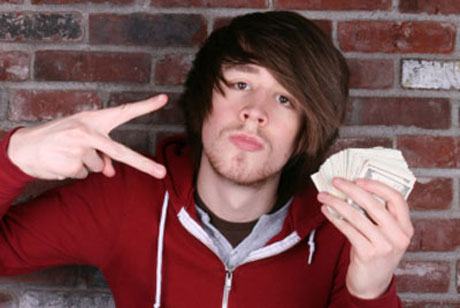 Paul: Hi, this is Paul from England speaking with Katia from Mexico. Today we are speaking about friends and money. Katia, if a friend came to you asking to borrow some money, what would your reaction be?

Katia: If I have a good friend that really needs the money then, of course, if I have the money, I would probably lend it.

Paul: So, in what situation would you lend your friend money?

Katia: Well, for example, it's a person that is really trying their best to have money and it's in a situation that it's an emergency and needs the money then I would lend it. What about you Paul?

Paul: Yeah, I would lend... I would be a little bit nervous to lend a close friend money because I think that money can sometimes affect a friendship.

Katia: I guess that's true. Do you have a bad experience with it?

Paul: Actually, I do. Yeah. I've had a bad experience of a very close friend of mine. He was asking for money from me and at first just once and then twice and then he started asking for more money and it actually had a big effect on our friendship.

Katia: Are you still friends?

Paul: Oh, we're not. We're not friends anymore, but he did buy his car.

Paul: Yeah, he kind of cheated me out of a lot of money, so he was working as well and he was trying to save some money and in the end he bought his car but he lost his friend.

Katia: Yeah, I guess that's very difficult to say, but what about... would you ask for money if you need it?

Paul: Personally, I think before I asked a friend for money I would prefer to either ask my parents or my sister. How about you if you were in that situation?

Katia: Well, if I had no choice, and not asked my family, I could ask my friend. Of course, he has to be a very good friend and for a very good reason for me to ask for money.

Paul: So could you lend me some money, cause I'd like to go to Hawaii next week?

Katia: Well, Paul let me think about that one.

I think that money can sometimes affect a friendship.

Something that 'affects' a friendship causes positive or negative change.  Notice the following:

Did you have a bad experience?

A 'bad experience' is a negative result of an action, situation or choice we have made.  Notice the following:

A 'close friend' is someone we like, see and talk to a lot.  Notice the following:

It had a big effect.

We use the word 'effect' to talk about something that causes change. It can be positive or negative.  Notice the following:

In the end he lost his friend.

We use the phrase 'in the end' to talk about the result of a situation.  Notice the following: