David talks about how deforestation and the problems it causes. 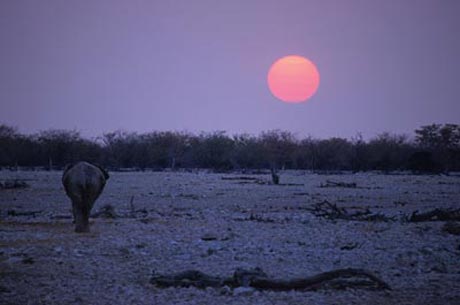 Shirley: Hi, David. How are you?

Shirley: So, environmental issues ... we were talking about them earlier throughout the world, and you're from Kenya.

Shirley: So, what's happening over there?

David: One of the environmental issues we are having is deforestation, which is really affecting both the wild animals and people living around the forest and, you know, the environment in general.

Shirley: So, what's actually happening to the people that ... for example the people who actually live around the forest area?

David: Cause you know, when you tend to interfere and come in between the wild animal's habitat and things like that, you somehow create like an imbalance in between the people and the animals and sometimes it's not a really nice thing cause animals tend to come close to where people live instead of living in their own habitat, which is a really bad thing.

David: They really don't attack but it's not a really nice picture or scene to know that you're vulnerable at anytime.

Shirley: What about livestock of the people that are close to forest areas?

David: You know, that's one of the things that are in danger cause, you know, if wild animals come to where people live, and they have livestock, probably they'll want to be eaten.

Shirley: So what's being done to try and remedy this, or to try and counterbalance the effect?

David: The activist groups that are coming together like ... you all know the Nobel Prize winner Wangari Maathai.

David: She has her own green belt movement in Kenya. She's been for so long trying to discourage people and educate people in what deforestation does to the country and how it effects people and the environment in general.

You're vulnerable from wild animals at anytime.

The word vulnerable means that we can be easily hurt by something or someone.  Note the following:

Everyone is not living to the living standard that they're supposed to be living.

A standard of living measures how well we live.  It considers food, housing, medical care; things like that.  Note the following:

They're trying in every way to earn an extra dime.

This just means you are trying to earn a little more money than your normal income.  Note the following:

They're trying to support their families.

When we support someone that means we take care of them.  In the samples below, the support is financial.  Note the following:

She's trying to discourage people from cutting down the trees.

When we discougage someone that means we make them agree not to do something.  Note the following: