David talks about the wildlife in his home country of Kenya. 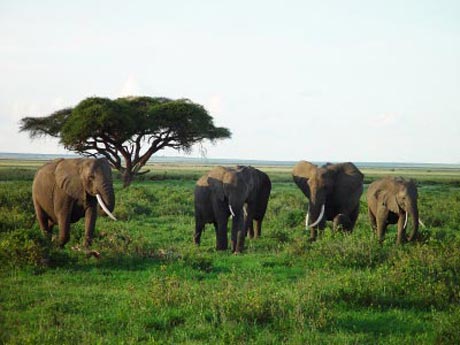 Shirley: David, so earlier, I was telling you I've always wanted to go to Africa and I'm just wondering, is that whole safari scene the cliché...

David: It's not a cliche, but it's something real you have to experience when you get there on the safari. What you see on National Geographic and this ... you know .. documentaries is true. It's nothing ... it's not anything that ... they wouldn't show you that's not true that you'll find in Kenya.

Shirley: Wow! So I could be just out there ... what driving around in my car and on my own just seeing all those animals?

David: No, you don't get to drive in your own car. They provide services for you like ... we have like for instance in Kenya we have an institute called KWS: Kenya Wildlife Service that does that and it has its own warders that are highly trained to protect you when you're in the forest.

Shirley: OK, so the tourists are kind of regulated?

Shirley: All right. So what could I expect to see if I go out?

David: You can expect to see the wildlife itself: animals in their own habitat, some sleeping, some walking, some hunting. You never know. It depends on the time when you're doing your safari.

Shirley: Am I gonna get chased by a rhinoceros?

David: No, they actually don't chase you cause, you know, most of the time you're just passing by. You're not disturbing them, but at times you get into contact with animals. You know, animals live in packs, so when one animal is excommunicated from its pack, it's an angry animal. For instance, buffalo, so when you find one buffalo by itself, that's not a really nice thing.

Shirley: So, what would happen if I found a buffalo by itself?

David: That's what we call a charged buffalo. It's really angry. It's been excommunicated from it's pack and it cannot join the other pack so it attacks at anything, you see, sometimes they are really dangerous and that's why you need the game warders who carry like ammunitions just to protect the tourists.

Shirley: Wow! Really! So what's the chance of me getting attacked by a wild animal?

David: One in a million. But you never know. You can never rule these things out.

David: It doesn't happen very often but at times in the past it's happened.

A cliché is something we see or hear so often that it is no longer special or interesting.  Note the following:

The tourists are kind of regulated.

Something that is regulated is controlled by government rules.  Note the following:

When one animal is excluded from its pack, it's an angry animal.

one in a million

Getting attacked by a wild animal is one in a million. But you never know.

The phrase 'one in a million' means that there is a very small chance that something will happen.  Note the following:

You can never rule these things out.

When we rule something out that means we decide it is impossible or will not happen.  Note the following:

cliché • regulations • pack
in a million • rule it out