The Allure of Fishing

Darren tries to convince David why fishing is such a fun sport. 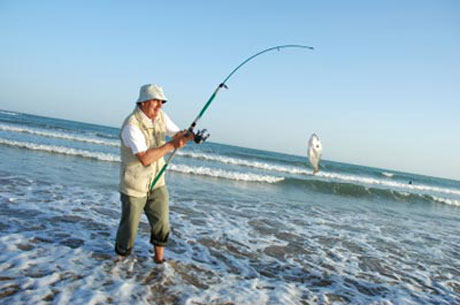 Darren: Well, I can understand that. It's something that looks as if it's not very interesting but it's that thrill and expectancy of just waiting and you can wait for hours and hours and catch nothing, but once that rod starts moving and you know you've got a fish on, especially for the bass that I fish for, there're very, very powerful fish and they can just take the rod and knock it off the rod stand and you're running off at the beach after your rod, which would mean you got a decent fish and the thrill of that moment is just .... it's hard to explain and the only way that you'll ever understand it is to actually have a go yourself. It's like everything. It doesn't suit everybody, but I think a lot more people would fish if they actually had a go and experienced catching a fish.

Dai: Is it a popular sport back home?

Darren: It's the most popular sport in the U.K. as far as participants are concerned, but it's not very well publicized. It's much more football, rugby, cricket, golf.

Dai: I guess it's not really a spectator sport.

Dai: Yeah, I mean, really, I mean, I'm sure a lot of people would find it - almost equate it to hunting in a way. I mean, how do you feel about that?

Darren: I can understand that view, but I think they need to look at the way fisherman act. As I have said, I only keep fish that I would eat. People who fish the rivers would always put their fish back cause they don't eat the course fish, and that's the way I would see it. It's going back hundreds of years to when people used to hunt.

Dai: And that doesn't hurt the fish .... putting it back?

Darren: As long as you do it quickly, there's never any harm. You can see the fish swimming away and there's no harm done.

Dai: So, you said that it's the most popular sport in Britain. Is that as new thing or has it always been that way? Do you think it will carry on being popular in the future? Cause it doesn't have a really .. kind of ... sexy image, does it, fishing?

Darren: No, it doesn't, but there is a major campaign to get youngsters into fishing. It is a very laid back sport. You know, it's not a violent sport by any means, and I think the future is good for fishing, more so though in the rivers, the sea fishing. Unfortunately, the sea stocks are dwindling quite drastically with the trawlers and there's a lot of concern that the fish numbers in the sea are going down so I think sea fishing may become something that's done by fewer people and a lot more people would move in and do river fishing because the stocks there are a lot greater.

Dai: You've almost sold me. So, OK, next time I'll come down to Pembrokeshire and you can take me fishing. What should I bring with me?

Darren: Well, I'd have enough kit for you to keep you going, but it's one of those things. Have a go at it. See what you like. See if you like it, sorry. If you don't, you don't. You just walk away and find something else, but I think, the majority of people who try it, would get hooked.

What's the allure of fishing?

'Allure' tells us why something is interesting or fun.  Notice the following:

Why do people like fishing? What's the catch as it were?

Here, 'the catch' talks about an unknown reason, or simply answers the question, "why?"  Notice the following:

That restaurant is always crowded. What's the catch?

You want me to trade my bike for your car. What's the catch?

It's hard to explain. The best way to understand it is to have a go yourself.

When we 'have a go' at something that means we try it.  Notice the following:

The sea stocks are dwindling quite drastically.

When something is dwindling that means the amount or number is getting smaller.  Notice the following:

Fishing is not a violent sport by any means.

'By any means' is often added to a statement to make the meaning stronger.  Notice the following:

You sold me. I am going to give fishing a go.

When we sell someone that means they agree with our opinion or suggestion.  Notice the following:

The majority of people who try it, get hooked.

When we get hooked on somehting that means we can't stop doing it.  Notice the following: