Mark talks with Mike about how he got into the martial art of Aikido. 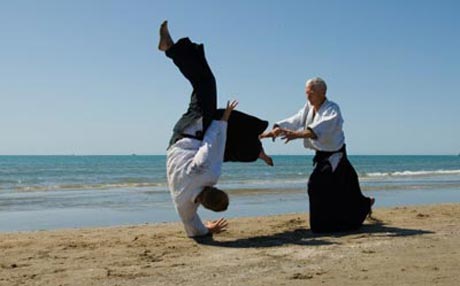 Mike: Now Mark, you study, or you do Aikido. Is that right?

Mark: Yeah, I started studying Aikido when I was about 15 years old.

Mark: Well, I saw a demonstration at a church one time and I immediately fell in love with it, and it works out great because I'm not that big of a guy and Aikido is a kind of martial art where small people can throw big people.

Mike: Do you get a lot of chances to throw big people?

Mark: Well, not recently, but definitely when I was practicing, when I was studying, it would be interesting because some big guys would come into the class and they wanted to show that they were very tough, and, but usually they were the easiest to throw.

Mike: Because they have the extra weight?

Mark: Well, yeah, because they attacked and they, in their lives, they're so used to using lots of strength, so their attack would be very hard and in Aikido, the harder you attack, the easier it is to throw.

Mike: Now, what interests you, or what do you like the most about Aikido?

Mark: Well, I guess at first, like any martial art, I just like the idea of I can defend myself if someone attacks me, but later, I just really enjoyed the exercise of it, and you learn some really cool techniques that, how to take someone off balance or to throw them and it's really easy after you study it for awhile.

I immediately fell in love with it.

When we begin to feel love toward someone or something, we 'fall in love'.  It can happen fast or slow.  Notice the following:

Aikido works out great because I am not a big guy.

When a new, sometimes unexpected event occurs and the result is positive, we say it worked out. Notice the following:

The harder you attack, the easier it is to throw.

In Aikido, the harder you attack, the easier it is to throw.

The harder we do something the more effort we make which inreases our chance for success.  Notice the following:

I can defend myself if someone attacks me.

When we defend ourselves that means we stop someone or something from causing us a problem.  Notice the following:

I can take someone off balance or throw them.

Someone who is off balance can easily fall or be knocked down.  Notice the following:

fall in love • works out • the harder
defend himself • off balance