Abeidemi talks about the music scene and what people like to listen to in her country. 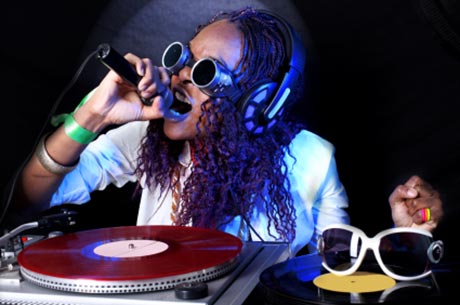 Todd: So Abidemi, you're from Nigeria. Can you talk a little bit about the music scene in your country?

Abidemi: Yes. Nigeria is just amazing now in terms of music and even in the past we’ve had and we still do have great music, great musicians. We love to party just as much as we love to eat, there's nothing that Nigerians loves more than parties. We love to have a good time. So of course, music plays an important role in that. One of the music that we have now is like fusion. A mix of old traditional Nigerian music and instruments with more Western Hip Hop, R&B kind of sound and even reggae and Jamaican music and some Spanish too mixing with it.

Todd: Oh wow, that sounds like a nice mix.

Abidemi: It is actually and because we love to dance as well, it's something that you can move your body to, you can dance to, and also some ballads as well, that makes people think. In the past, Nigerian artists were either they sang traditional songs which they sang in the languages that we had in Nigeria or they sang in English for the most part because we do have many languages. So if you want to reach a wider audience, you needed to sing in English. But these days the interesting thing is many people are mixing.

Abidemi: They will sing a little bit in English as well as in their ... mostly in their native language which makes for very interesting mixes because then people that do understand that language, it attracts them to it. And it becomes more our own thing in our own country.

Todd: So what are the languages that are mixed with English?

Abidemi: For example in my region, I speak Yoruba, so Yoruba, they use a lot of Yoruba. They use Igbo language too, it’s from the southeastern part of Nigeria. And there’s also Pidgin, Pidgin is a kind of ... it's Nigerian English or ... I know in other parts of west Africa they use Pidgin as well. But it’s more like slangy English, I would say. So there's a mixture of that. So the music becomes more Africanized, Nigerianized, if that’s a word. So it makes it much more our own thing and people enjoy it. Yeah, and it’s really good. So new artists now, they’re doing that and one of the results of that is it’s more accessible actually to people that are not Nigerians. So a lot of people download Nigerian music from YouTube. For example, there’s D'Banj. He’s an artist that’s gone over to the United States and he sings with Kanye.

Abidemi: Yeah, and some big top Hip Hop artist in the United States. There was a guy who they used one of his songs in one of the American - Black American movies in the States as well.

Abidemi: And he got a lot of exposure through that. So our artist are, yeah, they become more more famous it seems like. And they're leading other areas of Africa too.

Todd: Well I’ll be sure to put some YouTube clips up with the interview so people can check it out.

Can you talk a little bit about the music scene in your country?

Here, a scene means the environment or culture of one type of art in one area. Notice the following:

We have now what is like fusion, a mix of Nigerian music and R&B.

A fusion is a mix of work, such as food or art, from different cultures. Notice the following:

If you want to reach a wider audience, you needed to sing in English.

When you reach a wider audience, you get more people to see your work by using new methods or channels. Notice the following:

It becomes more our own thing in our own country.

A group's 'own thing' is just done by them and not others. Notice the following:

He got a lot of exposure through that.