Abiedemi talks about the music scene in her country and what artists are popular now. 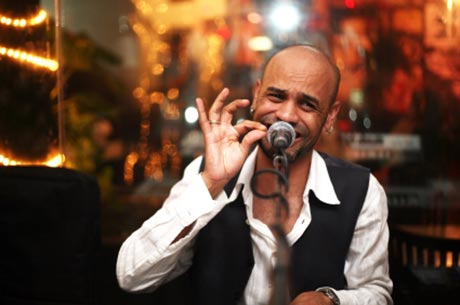 Todd: So Abedemi, we were talking about the music scene in your country. How do people consume music?

Abidemi: A lot of times ... in the past it was more you went to ... they had, how do I say ... a parties. They would invite well known artists, the more money your family had the bigger the artist could be because then they could pay a person. But these days a lot of artists come and they play. We’ve had like people like Chris Brown and Rihanna, even Jay-z go to Nigeria and play in the big cities and people pay for concerts. So there are more and more concerts happening that people go to. A lot more people have access to computers now so people listen on YouTube. CDs are very cheap, you could get a CD usually pirated but you could get something for like 100 yen or 100 ... I don't know, one dollar, so it’s really cheap. Lots of people buy music, they watch video clips, on TV even they have music channels too where people listen to music. So music is a part of everyday life and wherever you go on the streets constantly music is playing from cars, from windows, everywhere. It’s very loud and noisy.

Abidemi: Sometimes, yes, especially clubs, for clubs, well known clubs in big cities, musicians do play there to make money but I think for the most part where musicians try to make money ... they make most of their money from playing either private parties or playing ... from making CDs. So those are the two main ways that I think they make money. We don’t have quite as developed music scene where you have concerts happening every night as maybe in other countries like the States or England. But I think it is getting better, as more and more people get more money, so surely, economically as people become more ... they have access to money they're able to go out and listen to music and play. Some ... how do I say ... some eateries, they call them bukas, they're like bars, basically bars, but some bars do have bands playing every night. Yeah. So yeah, we have that as well.

Todd: Oh, that sounds great, so it’s definitely a developing music scene but it’s kind of unique in its own way.

You could get a CD usually pirated on the street.

Pirated items are copies that are illegally sold usually on a secret market. Notice the following:

A venue is a place where something happens, usually some type of event. Notice the following:

For the most part

For the most part, they make most of their money from playing either private parties or from making CDs.

'For the most part' means 'in general' or 'generally'. It describes the most common situation. Notice the following:

unique in its own way

It’s kind of unique in its own way.

The phrase, 'unique in its own way', means to be unique or orignal and not like anything else. Notice the following:

Here the phrase 'moving away from' means to become less popular or common. Notice the following: