Ana and Paul talk about the feeling small compared to something that is big. 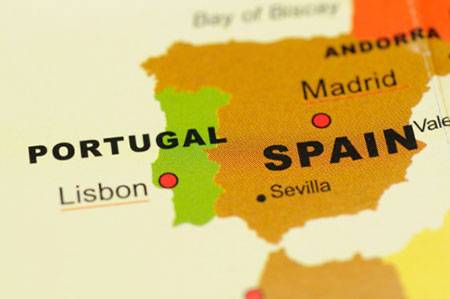 Michael: So Ana, I was wondering, are you familiar with the term inferiority complex?

Ana: Yes. I think I've heard it before.

Michael: Well, you know, sometimes when a person feels he is not quite as good as other people at something then he can feel inferior or not as good. But this is also true for countries sometimes. For example, if there's a very small country and it's next to a very big country, such as Portugal and Spain, would you say that's the case in your country?

Ana: Yeah, that's interesting. I think that's definitely the case in our country. Spain is a big country and in terms of the economy, they have been doing a lot better than Portugal recently. And actually, we're starting to get a lot of products from Spain. So things that used to be produced nationally before, now are being imported from Spain.

Ana: And also in terms of other things like banks, a lot of our major banks in Portugal are Spanish now. And a lot of Portuguese students are moving to Spanish universities because the education is better there.

Michael: Really. But you have some very old universities and a very old tradition or academic tradition in Portugal as well then, do you?

Ana: Yes, we do. And actually, our universities are full but I think the problem is that they're not growing enough, so there aren't enough places for Portuguese students in our universities. So many of them are moving to Spain. It's very interesting but also a little bit sad that we can't provide the education that these students need nowadays.

Michael: I see. If you look at Portugal on the map, you can see it's much smaller than Spain. What about the population? How many people live in Portugal?

Ana: I think we have about eleven million people.

Ana: Yeah. So it's not very big. But actually, it might have changed in the last few years because so many Portuguese people are moving to other countries around the world. Since the credit crash and everything that's been happening with the economy, there haven't been a lot of jobs in Portugal.

Ana: Yes. That was a big scandal actually because, yeah, the government recommended young Portuguese people to move to other countries when in fact we think that they should be creating jobs in Portugal for new people.

Michael: So people were quite angry. So how was that? What were the people's reactions?

Ana: I think people were quite angry. It's a reality though. So many young people are moving overseas. But we understand that at this point, it's more of a survival instinct and we should go if we want to get a job.

Michael: And then maybe – do young people who leave the country want to come back and work in Portugal again when the economy is better?

Ana: Yes, I think so. I think most people want to go back to Portugal but I think we might have to wait a few years before things are back on track.

We can't provide the education that these students need nowadays.

Since the credit crash, there have been few jobs.

Here, a crash is a sharp drop in a market. Notice the following:

That was a big scandal actually

A scandal is an event that people feel is morally or legally wrong. Notice the following:

But we understand that at this point.

The phrase at this point means at this time. At that point refers to a time in the past or future. Notice the following:

It's more of a survival instinct.

A survival instinct is a feeling animals and people have to avoid danger. Notice the following:

We have to wait before things are back on track.

When something is back on track, it is operating again after a delay or slowed progress. Notice the following:

nowadays • scandal • crash
at this point • survival • back on track

#1333 Portugal in Contrast
Ana talks about how her country is similar to Spain.
INT 4
Abidemi