Sarah talks about how she worked for a television station and explains what it was like behind the scenes.

Adam: Sarah, I heard you worked in reality TV. Can you tell us a little bit about that?

Sarah: Yeah. When I was living in Orlando, Florida, I worked for a production company that filmed reality television. And first of all, it was an interesting job because I worked from 7 o’clock at night until 5 in the morning. It was me and four other guys. And I was the only person who hadn’t been to film school that was working there.

And overnight we would transcribe video footage. So what we would do is we would watch the extended footage of the reality shows that this company produced, and we would type out everything that they were saying. And I quickly came to realize that everything in television is scripted, even reality television because they would often prompt the people what to say on the shows. 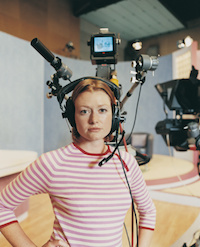 Adam: Interesting. Was the producer there on camera prompting them to say things that you saw but we as viewers might not see?

Sarah: Oh yeah. So all the producers and the staff are all around and in-between takes, you know, they’ll try to get them to say things a certain way. And so they’ll often retake scenes over and over again until they get the kind of footage that they want.

Adam: Interesting. Can you tell us what TV show you were filming?

Sarah: No, I probably can’t say that.

Adam: How did you get a job like that if you didn’t have the same filming background that your colleagues had?

Sarah: I grew up in radio, so because I had radio, media on my resume, they hired me.

Adam: Were you interested in reality TV before you got that job?

Sarah: Not at all. I was just trying to pay rent and pay my bills. So actually at that time, I was working five different jobs. That was just one of them.

Adam: Was there a reason that you had to work at night?

Sarah: That particular job, that’s what they hired me for because they had people who did that job during the day, too.

So we were the night shift.

Adam: So that’s really interesting. So when you watch reality TV show today, how do you feel? Can you sense what the producers are trying to do or can you enjoy it? How do you feel about watching reality TV now?

Adam: How did the actors or the members of the reality TV show casts, how did they feel about this scripting of the TV show?

Sarah: They seem to be fine with it because they, you know, signed all the contracts and the things to be on the show. So they don’t really mind it.

We would transcribe video footage.

Transcribe means to write spoken language down on paper or print material. Notice the following:

Would type out everything.

Here 'type out' means to type something onto a computer or paper. Type out and type up have the same meaning. Notice the following:

They would often prompt the people what to say

When you prompt someone, you encourage them to say or do something you want them to do. Notice the following:

The staff are all around and in-between takes.

A take is a scene that is filmed in a movie. When you retake a scene, you film it again. Notice the following:

When you pull an all-nighter, you stay up all night and do not go to sleep. Notice the following:

It is all fake and all scripted

Something that is fake is not real. Notice the following: