Todd talks about the three main countries he has lived in overseas and why he went to each country.

Meg: Hey, Todd. I know you've traveled a lot. What countries have you lived in?

Meg: Wow. So when you lived in England, why did you live there?

Todd: It was the first country I traveled to after college. And I had a work permit, a work visa for one year. And I worked at a pub restaurant, which was great. It was in the countryside. And I really enjoyed it. And then I did that for six months. I lived near Cambridge. So, I was near Cambridge University. And then after that I moved to London. And again, I worked at a restaurant. And I lived in London and just worked.

Meg: Wow. So it was after college. How old were you?

Meg: Oh, and living in London. That must have been fun.

Todd: Yeah. Everybody complains about the weather.

Meg: So after England, did you move someplace warmer?

Todd: I did. Right after England, I moved to Thailand. And I lived in Thailand for over four years.

Meg: Wow. Why did you live in Thailand?

Todd: I was traveling. And in Thailand I had no money and I needed a job. And I wanted to stay in Thailand, so I became an English teacher.

Meg: Did you teach English there for four years?

Todd: I did. So I went there and I began teaching English. Then I got a teaching course certificate to teach English in Thailand, and I really enjoyed it. The Thai students were really fun. And Thailand is a great place to live because the weather is really nice. The people are really friendly and the food is delicious. It has the best food in the world, I think.

Meg: I've also heard that Thailand is beautiful. Is it true?

Todd: It is. It has many, many beautiful islands and it has lots of beautiful places with nature and the mountains. It has jungles. It has beautiful beaches. So it's a nice place to live.

Todd: I did. Thailand was great. Yeah.

Meg: So England, Thailand, you said next was Japan?

Todd: Yeah, so next was Japan. And Japan is nice. I am a teacher, an English teacher in Japan and I love teaching English in Japan. Like Thailand, the food is really, really good. The people are nice. The scenery is really beautiful. So Japan is really nice.

Meg: Are there fun things to do in Japan?

Todd: Yes. Actually, I like Japan the most because you get everything. You get lots of beautiful nature. So, you can go hiking. You can go see beautiful beaches. You can go to really nice islands. But also Japan has many, many nice cities. So you can go to Tokyo, Osaka, Fukuoka and the cities have lots to do. There's good shopping, great restaurants. It's easy to travel in Japan by train and bus. So, it's really nice.

Meg: Oh, that sounds like the best of both worlds.

Todd: Yeah, it is. Definitely a good place to live.

I had a work permit.

A work permit is a piece of paper that shows you can work legally in some location. Notice the following:

That must have been fun

That must have been fun!

We use this phrase to express interest about a person's experiences. Notice the following:

Interestingly, in England, I could not speak English.

We use the phrase 'interestingly' to show that something is not common or a surprise. Notice the following:

Did you move someplace warmer?

Someplace and somewhere are used to talk about places that are not specified. Notice the following:

I got a teaching certificate.

A certificate is an official document showing something is verified. Notice the following:

best of both worlds

We use the phrase, the best of both words, to show you can benefit from two things at once. Notice the following:

work permit • have been • interestingly
someplace • certificate • both worlds

Video 1405
Are you a budget traveller?

1407 Dressing for School
Fashion in the classroom. 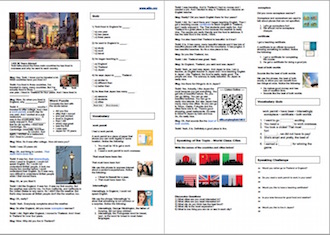