Sarah and Jonh discuss what students should and should not wear to class.

Sarah: Okay, John, let's talk about fashion. You know, I have students and I think sometimes they don't, they don't dress appropriately for the classroom.

John: Oh yeah. Sometimes, it looks like students are wearing the clothes which they will plan to wear at night, to go out and go to a party with friends.

John: I agree with you.

Sarah: Because I think when we talk about appropriate clothing, I think girls very often take most of the blame for that. But I think it's our society, and we can fix the problem by having a uniform for girls and boys and teachers, and we can feel like part of a team.

John: I know there are a lot of problems of school uniform. First of all, students don't want to all dress the same.

John: But there's other problems. Usually, when schools have a uniform, the boys wear pants and the girls have to wear a dress or a skirt. I don't think that's fair.

Sarah: I agree. I don't think that's fair either. I think a lot of schools these days they can let the girls choose. And so the girls can wear shorts or pants.

John: Well, that's good. I think even beyond the pants or a skirt issue, there should be some flexibility to customize your uniform, whether you want to wear shirts that are a different color, even if they're in the same style. Or you want to have some pins or patches or some other accessories.

John: Hmm, wow, that's a difficult question. I have to say, I don't think I have been in that situation. I guess I'm lucky enough my students haven't pushed the limit too far. But I feel that I would say something if a student came to class in clothing that was, in my opinion, too inappropriate. I would ask them to, probably to, if not leave the class, at least don't wear clothes like that next time.

Sarah: Well, I had a student, and he came to class with a jacket. And it looks like a very expensive jacket but it had a very bad word written on the jacket.

Sarah: And after class finished, I told him to, "Wait, please." And I told him that he probably shouldn't wear that jacket to class, or maybe, he shouldn't wear it anymore at all. It just isn't very appropriate. And he came to class next time and he had the jacket but he had taken it to a shop and they had taken the bad word off of the jacket.

And so, I was very happy to see that, that he changed his behavior and now he could dress the way he liked but also be appropriate.

Girls offten take the blame for that.

When people take the blame, they are seen as the reason something bad happened. Notice the following:

I like flexibility to wear what I want to work.

Flexibility is the ability to choose a preference, or change things as you like them. Notice the following:

There should be some flexibility to customize your uniform.

When you customize something, you change it to your preference. Notice the following:

My students haven't pushed the limit too far.

When you push the limit, you do things that are almost inappropriate. Notice the following:

His clothing was inappopriate for class.

When something is inappriate, it is acceptable for the situation. Notice the following:

He changed his behavior.

A person's behavior is how they act. For example, there is good behavior, bad behavior and rude behavior. Notice the following:

Video 1408
Do you worry about your appearance?
INT 4
Christina

Video 1407
What do you think about tattoos? 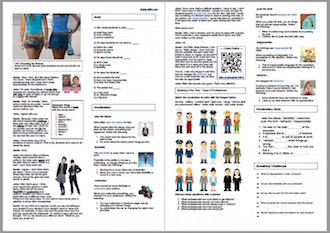