Katie talks about how singers can win Eurovision and how people can vote from their country. 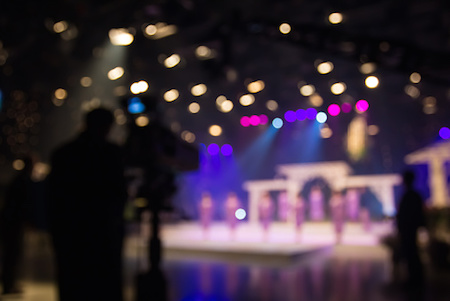 Aimee: So why do you think Britain never wins? Is it because their songs are always terrible?

Katie: Well, I mean, I disagree as a British person. I think the songs are always awesome, of course. But usually, how people win Eurovision is when you want to vote for a country, you have to ring up. And people always vote for the countries that are next door to them. So countries that are close to them. So the UK really only has Ireland next door. So we only really ever get votes from Ireland. We're not close to any other countries.

Aimee: Yeah. I guess that's it.

Aimee: It's not physical closeness, it's like emotional closeness as well, isn't it?

Katie: We're not either. We're not physically close or emotionally close to any countries in Europe, so.

Katie: We don't get any points.

Aimee: So which countries typically manage to get a lot of votes then?

Katie: Or unless we just move the entire country in the middle of Europe.

Aimee: Well, that's not going to happen, isn't it?

Aimee: So it's not possible to vote for your own country?

Katie: No. You can't vote for your own country. You have to vote for any other country except for yours.

Katie: Otherwise, Russia would just win it every time. Russia is so big.

Aimee: That's true. I didn't think about that. It has a massive population. So how does it work exactly? You're sitting at home. You're watching the TV, and then you have to pick up the phone and call, is that it?

Katie: Yeah. When everyone sung their song, they will show you telephone numbers for each country. And you have to choose the country that you liked the best. And then you call that number, and that counts as one vote for that country. And then the country that gets the most votes gets 12 points. And then the next country down gets 10 points and then 8 points, all the way down to 1 point. But a lot of countries in Eurovision sometimes get 0 points for the entire show.

Katie: The UK often gets 0 points.

Aimee: And what is the hosting language?

Aimee: English and French only?

Aimee: Oh that's interesting. And I assume that each individual country who's watching the show has their own presenters speaking in their native languages though.

Aimee: To help translate everything.

Katie: They have their own commentators who will talk throughout the entire show and explain everything.

Aimee: Okay. Wow. It's such a massive scale, isn't it?

Katie: It's the best event of the year. My favorite thing ever.

Aimee: So since you can't vote for the UK, then who do you normally vote for?

Katie: Well, I normally vote for the country that I thought was the most interesting, which is how I think you should vote in Eurovision. Seeing that it's a singing competition then I think it should be judged on who is singing the best or has the best song or who has the most exciting outfit. But yeah, it changes every – it depends on who I think was the best.

Aimee: Right. That sounds like a good, fair strategy.

Katie: I think so. I think the rest of Europe should do that as well.

Aimee: Yes. I guess they should.

You want to vote for a country.

When you vote for something, you choose it and hope it wins by getting the most votes. Notice the following:

You ring up to vote.

To ring up means to make a phone call. To give someone a ring means the same thing. Notice the following:

The countries are next door to them.

When two things are next door, they are neighbors or side by side. Notice the following:

There is a physical closeness.

Here, a physical closemess means to things are next to each other. Notice the following:

We have an emotional closeness.

People who share an emotional closeness have similar feelings about things they care about. Notice the following:

You have to pick up the phone.

When you pick the phone you do so to start or answer a phone call. Notice the following:

They have their own commentators.

A commentator is a person who reports on a event live. Notice the following:

Video 1413
Are talent shows popular in your country? 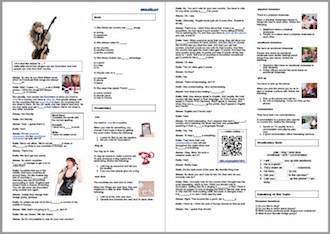