Phil talks about his travels in Malaysia and a historical city he likes. 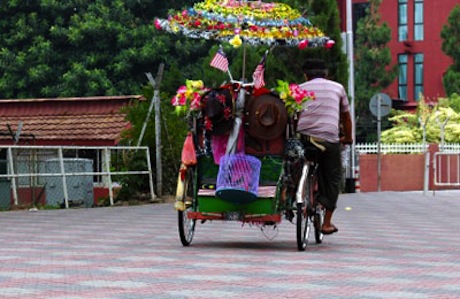 Todd: So, you were saying you went to Laos, you went to Thailand, by any chance did you go to Malaysia?

Phil: Yeah, I spent, I spent some time in Malaysia. The first stop, we went there from Singapore, just taking a bus and we ended up in Malacca. Stayed about five days in Malacca. Malacca's nice. There's a lot of history there. We learned a lot about the colinization of Malacca, the Portuguese and then the Dutch, and then the English and then the Japanese, and, yeah, it was a really interesting place. There was old St. Peter's Church. There's several Mosques. It's a good place to spend for a few days. From there we went to Kuala Lumpur. We didn't really spend much time in Kuala Lumpur. We had spent a week in Singapore and were pretty tired of cities. so we only spent I believe two or three days in Kuala Lumpur, just visits from shopping malls, the KLCC, the Petronas Towers, and yeah, that's basically what we did in KL, and then we went to the Cameron Highlands, and if you like hiking, the Cameron Highlands is a great place for you. I don't know, they might have 16, 17 different marked trails. There's a whole lot of unmarked trails. We spent a month there. I think I only went on only six hikes maybe during that month but once again we were being lazy, and yeah, if you're an avid hiker then you're certainly going to enjoy the Cameron Highlands.

Todd: Yeah, actually, I did the hike in the Cameron Highland once, and foolishly I started my hike at about 4 o'clock and I thought I could make the loop of the trail at the time, and the sun started to go down, and I was in the jungle, and I was worried about getting back, and I just made it back, but I was pretty scared for awhile.

Phil: You were lucky. Some people don't make it back.

Todd: Yeah, actually, why don't you tell the people about Jim Thompson?

Phil: Jim Thompson was a trader. I think he was maybe based in Hong Kong, but I'm not sure. Maybe it was based in Malaysia. He went hiking. I believe it was 1967, in the Cameron Highlands, and no one has seen him since. He's just vanished from the face of the earth. So, be careful if you go hiking there. Watch your step.

By any chance did you go to Malaysia?

We use the phrase 'by any chance' when we are asking if something is true or possible, but we don't really expect the answer to be yes. Notice the following:

We learned about the colonization of Malaysia.

To 'colonize' a place is to establish a colony or area to live there.  Colonization happened frequently from the 1600s until the 1800s, when countries were exploring new lands and making towns in the new places.  Usually this involved conquering the local people.  Notice the following:

I just made it back.

The phrase 'make it back' means to return from another place but the return trip was either long or difficult.  Notice the following:

face of the earth

Jim Thompson vanished from the face of the earth.

If someone falls off 'the face of the earth' he has disappeared and you don't see or communicate with him anymore.  The face of the earth is literally the ground we stand on, but we usually use to talk about all the parts of Earth in a general sense.  Notice the following:

Be careful if you go hiking. Watch your step.

Literally, 'watch your step' means be careful where you put your feet, but we use this phrase to tell someone to be careful.  Notice the following:

Complete the sentences with the words below.
any chance • colonized • make it
face of the • your step