Roe talks about a surfer he admires and why he is go good. 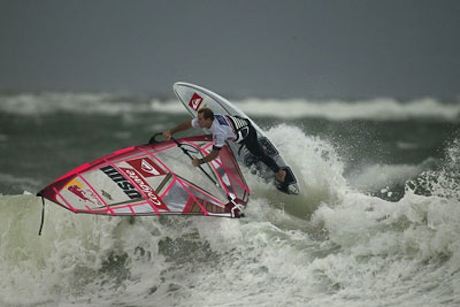 Todd: OK, so now we are going to talk about other people, so you can talk about somebody else, a friend, a family, a celebrity. Who would you like to talk about?

Todd: Who rips? What does "rips" mean?

Roe: Ripping means if you are like a surfer, if you say he rips, he is really good.

Roe: And windsurfing, too.

Roe: Yeah, it means he can make some great moves.

Roe: Just go to the beach, and you see it. Like, you don't even have to talk, you just have to see it, and if you rip then you get respect, and if you talk, if you have a chance to talk to the guy, it's almost always that he is a nice guy.

Todd: So guys who rip are nice guys.

Todd: But you said earlier that you are very good windsurfing so you are closest to ripping at windsurfing.

Todd: Maybe you're being modest. So a modest person doesn't say he rips or he is good

Roe: You got the point, no I was just kidding, I can't rip.

Todd: OK, who is the best surfer in the world?

Todd: Robbie Naish. What country does he come from?

Todd: From Ohahu, so he surfs on waves. -- How big are the waves that Robbie Naish surfs on?

Roe: OK like Jaws, there is a specific point in Maui, Hawaii Maui, and it's called Jaws, cause people say that there are a lot of sharks at the point, but anyway, at Jaws 25 meters or 30 meters in winter.

Todd: Wow! And were on the second floor so that's three stories.

Todd: Man, that's high. That's really high. What's the highest wave you've ever surfed on? So you're standing up here. The ceiling!

Roe: Yeah, if you are in the ocean you are like lying down right, so it's quite high actually, yeah, if you're standing up it doesn't seem that high but.

Todd: Wow, has he ever come to Japan?

Roe: He owns a boarding, sailing, and what have you. He owns a lot of companies. Yeah, he's smart too. Nice guy.

Todd: Nice guy and he's a nice guy because he rips.

You can talk about a friend, family, a celebrity.

A famous person is a 'celebrity.'  There are local celebrities, known only in their own city, or there are international celebrities that people know all over the world.  Notice the following:

If you rip then you get respect.

When someone 'respects' you they honor you or are impressed by what you do.  Notice the following:

An 'easy-going' person is very relaxed about things.  He will do whatever other people want to do.  Notice the following:

Maybe you're being modest.

To be 'humble' about something is describe a skill that you have or something that you have done in a way that makes it seem less important or impressive.  Notice the following:

No I was just kidding.

If you are 'kidding' you are making a joke or not being serious about something.  Notice the following:

Complete the sentences with the words below.
celebrity • respect • easy-going
modest • kidding