Alexandra talks about living in Miami and the activities she likes to do. 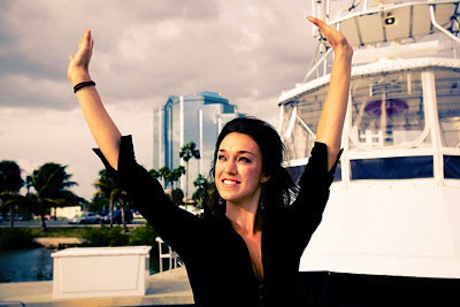 Alexandra: Hi, how are you?

Alexandra: Yes, I am.

Todd: OK, so why don't you tell us about Miami.

Alexandra: Born and raised in Miami, and it's very warm, very warm. Lots of different people. It seems to be the port of Central and South America, so there's several different people from different countries coming through, as well as from Europe and some parts of the North of the United States come down for a visit and it's a tourist destination.

Todd: Wow, were you born in Miami?

Alexandra: Yes, I was.

Todd: And you lived your whole life there?

Alexandra: The weather obviously, weather and the nearness to the ocean. Everything you can think of that can be done on the ocean, you can find a way to do it there.

Todd: Oh, nice, so what water sports do you play?

Alexandra: There's water volleyball, and do some skiing, and diving, and also during season you can go and catch lobster down in the keys.

Alexandra: Yes, so it can be fun.

Todd: That's so cool. So you catch the lobster and eat it that night?

Alexandra: Yes. Yes. Absolutely. So you just go get the lobster out of the traps, take the upstairs to the boat, so to speak, and just throw them in a pot, and you're gonna have dinner in no time.

Todd: You don't eat them on the boat do you?

Todd: Really! People eat the lobsters on the boat?

Alexandra: Yeah, you can.

Todd: Wow. Are they dangerous? I mean, cause they can snip your fingers.

Alexandra: Well, you don't, you make sure you catch them in the right, hold them from the tail end and people usually put rubberbands around the claws, and you can just throw them into boiling water, get your butter out and you're good to go.

Born and raised in Miami.

The place where you "grow up" or grow from a child to an adult is where you are "raised."  Notice the following:

Miami is a tourist destination.

A "tourist destination" is a place where people like to travel for vacation, maybe because of the weather because of the things to see.  Notice the following:

You can find a way to do it in Miami.

To discover a method to do something is to "find a way" to do it.  Maybe you find a way to make money selling jewelry on the beach.  Notice the following:

Lobsters can snip your fingers.

To "snip" something is to cut it.  A lobster has very sharp claws and can cut your fingers.  This is usually used to describe something that cuts like a pair of scissors. Notice the following:

Get your butter out and you're good to go.

If you are "good to go" you are prepared or ready.  Notice the following:

Complete the sentences with the words below.
raised • tourist • find a way
snip • good to go