Eli talks about her interesting in design. 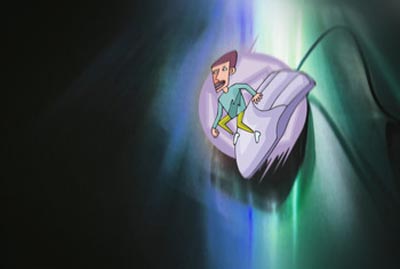 Todd: Eli, could you talk a little bit about what you study to be an animator and how the industry has changed over the years?

Eli: Yeah, well, I actually studied, the degree I did was a graphic design course, which taught you art, every aspect of graphic design but they looked at graphic design as actually communication design which is basically just trying to get a message across a certain way thought the use of graphics, you know graphical methods, so I mean, that doesn't necessarily mean just you know text, words, on a screen, you know, words on a poster. I mean, people's people's views of graphic design is usually like posters, advertising, um, adverts in magazines but we were sort of made to think that that is just a tiny bit of graphic design, I mean you can communicate message, through any medium, you know even sort of acting, and stuff like that, they were, it was really that broad so, obviously with my love of anime I chose animation, I mean, it's something I've been interested in for a long time and I do 3D computer animation kind of like "Toy Story" but obviously not as good. I was actually the only person on my course doing that, so it was quite a challenge. I had an amazing animation tutor, who had got some pretty amazing portfolio behind him, to help me out, and if it wasn't for him, I probably would have torn my hair out years ago and maybe even quit the course cause I, there was a big, dispute with sort of my view of computer animation, what I was interested in with the graphic design tutor's views, they were all about deep meaning and you know, messages behind work and I was actually about learning how to animate well, you know the techniques of animation. I mean it's always very important to have the background skills of ideas because you can be technically good at something, you can be able to use a computer program brilliantly, but if you don't have the sort of ideas or background then you're never going to be able to make a good piece. I mean, I've heard that Pixar, the company who make "Toy Story" actually hire actors instead of animators to do their animating. They hire them for their acting skills and then they teach them how to use the software afterwards, cause actually, that's what it's about, it's making characters act, it's whatever it is, whether it's a coke can or a book, if you want to give that a personality, you got to think about how you're gonna give this inanimate object a personality, how are you going to make it looked scared, how are you going to make it look happy, um, that's what I was interested in, sort of techniques of learning how to do that, so, yeah, it was a struggle but it was definitely worth it in the end, and I think I'll go on to have a good career.

The degree I did was a graphic design course.

A 'degree' is a higher education qualification. This usually refers a degree that you receive after completing a four or five year program at a university.

You can communicate message, through any medium.

A 'medium' is a method you use for communication. Different examples are radio, television or newspaper.

I was actually the only person on my course doing that, so it was quite a challenge.

Used like this, a 'challenge' is a task that is not easy to complete successfully.

tear my hair out

If it wasn't for him, I probably would have torn my hair out years ago.

When you 'tear your hair out' it means that you are very frustrated. This is a figurative description, so the person is not actually tearing her hair out.

You got to think about how you're going to give this inanimate object a personality.

When something is 'inanimate' it does not move or have life.