The Future of TV

Mark and Todd talk the latest in television technology and what the future may be like. 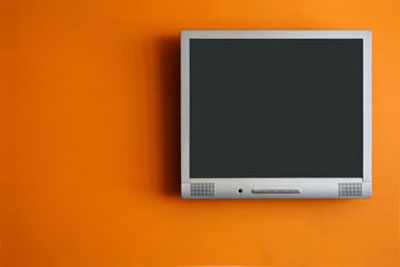 Todd: So actually we talked a little bit about TVs in the past, what about TVs of the future? Nowadays you can watch television on this very tiny screens, like the ipod video. What do you think about that?

Mark: Right. I've just seen one of them for the first time. I think they're fantastic. They're really great. Yeah, especially when traveling. But the future of TV, I was listening to an interviewer a few nights ago with Bill Gates and he's going to try and move from computers to TV - interactive TV - and this sounds good. Yeah, TV of the future. Sounds great.

Todd: So what was he saying about interactive TV?

Todd: Wow, that would be cool.

Mark: Yeah, and also for sports you could maybe choose your own sports team, which would be good.

Todd: Yeah, I actually saw another thing on TV in the future, and they we're saying because of what is happening now about buying television shows over the internet that soon there will be TV with no commercials. You just buy the program for one dollar and then you watch it without commercials

Mark: Yeah, that would be fun, yeah. That would be good. Hopefully, I want them to see them actually, I know they do a little bit, but I'd like it so you can hook up your PC to your TV as well. I know you can a little bit, so download things on your PC and then watch on the TV.

Todd: So when we're old and grey we'll be able to tell our children "In our day, we actually had to get up and turn the knob."

a few nights ago

I was listening to an interviewer a few nights ago with Bill Gates.

A 'few nights ago' means a couple of nights in the past.

What was he saying about interactive TV?

'Interactive TV' is television that people can react to and interact with. It is a new technology.

hook up your PC

I'd like it so you can hook up your PC to your TV as well.

To 'hook up your PC' means that you connect it to something such as a power source or another electrical appliance.

when we're old and grey

When we're old and grey we'll be able to tell our children "In our day, we actually had to get up and turn the knob."

When things are moving fast it means that they are progressing at a quick pace.

765 Planning a Birthday
Lupe talks about her birthday.
﻿
INT 5
Kara

763 The Future of TV
The latest in television technology.
﻿
INT 5
Mark

Complete the sentences with the words below.
don't mind • knob • stick with
flicking • program