Kara and Lupe talk about going to the clubs and the wild endings to the evening. 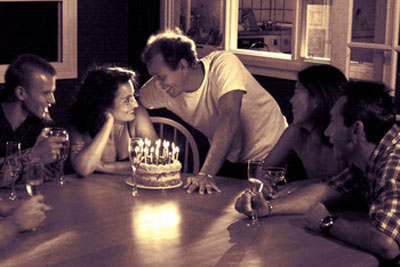 Kara: So, now that we've had my birthday and my party, what you would you like to do for yours?

Lupe: Well, it's still a couple months away and I really did enjoy my birthday last year and the year before that, but my twenty-first birthday was by far the best when you organized my surprise party, cause I myself hadn't had a birthday party in probably ten years before that, so having another party would be absolutely awesome, but I know that it's a little bit harder now to get everyone together, so I think I'd like to keep the tradition going and meet up at El Torito and have a few drinks, a few appetizers. Some cheese cake and then go out for some drinks and maybe a little bit of dancing.

Kara: Well, on your twenty-first birthday we also went Disneyland in Anaheim. We can also do that again. I know that's one of your favorite places.

Lupe: Actually, it is. Disneyland is my favorite place to go, and my birthday does land on a Wednesday this year, so maybe the weekend before that, which happens to be a three day weekend because of Memorial Day, so that's a possibility. We could definitely go down to Southern California and have some fun down there.

Kara: And then, on your actual birthday, we could do the restaurant, drinks, appetizers.

Lupe: We can. We could make it a week-long birthday. You know I always like that.

Kara: If that is the case, then we would have birthday year cause cause we seem to do things every weekend throughout the whole year.

Lupe: That's true, but I was just saying to maybe focus more on the birthday girl. I really wouldn't mind it, especially for the whole month. Get a little extra attention, because, you know, I do like that.

Lupe: No, I'm serious. I think it's a great idea. And you can get me a little tiara, so what I can do the birthday princess. Make sure everybody knows that it's my birthday when we go out.

I think I'd like to keep the tradition going and meet up at El Torito.

When you 'keep the tradition going,' it means that you take great care in making sure that certain past actions are done again, because you think they are very special.

My birthday does land on a Wednesday this year.

To 'land on' means that an event happens on a particular date or day.

So maybe the weekend before that, which happens to be a three day weekend because of Memorial Day.

Memorial Day is an American public holiday which is used to remember soldiers from all wars who are dead now.

That's the best, because then you get to celebrate in the middle of the week and the weekend before and hopefully the weekend after.

'That's the best' means that particular thing is better than anything else.

I really wouldn't mind it

I really wouldn't mind it, especially for the whole month.

'I really wouldn't mind it' means that it would not bother you.

774 Spanish or English
When to use English or Spanish.
﻿
INT 5
Lupe

773 Being Bilingual
Being a native speaker in two languages.
﻿
INT 5
Mark

Complete the sentences with the words below.
type • makeshift • funny
what can • you're one