Alex talks about his city back home in the United States. 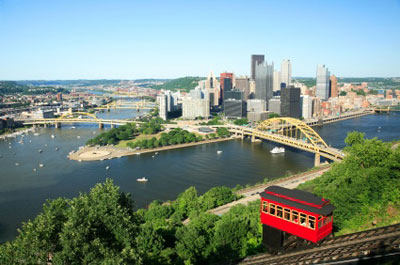 Todd: And how do you spell that?

Todd: OK, and where are you from Alex?

Alex: Pittsburgh is, let's see, it is very quiet. It's medium size, so there's not a lot of people but enough to make it fun but you know, it's very quiet.

Alex: Ooh, the best thing? I'd have to say, Oakland! Oakland is a part of Pittsburgh. It's where Pittsburgh University main campus is. And there's lots of stuff to do. Lots of college kids around. It's fun to hang out.

Todd: OK, did you go to the University of Pittsburg?

Todd: OK, are they a rival universities?

Alex: Oh, well the fact that it's kind of quiet sometimes, makes it, kind of a bit boring. I mean, sometimes there is not a lot of things to do. But other than that it's OK.

Alex: Ooh, it depends really. It gets really cold in winter and really hot in the summer, so it's kind of mixed.

not a lot but enough

There's not a lot of people but enough to make it fun.

When 'not a lot but enough' people do something it means the number of people doing something isn't big, but the ones that do it have an impact.  According to the example, there is an acceptable number of people living in Pittsburgh to make it a fun and interesting city. Notice the following:

Oakland is where Pittsburgh University main campus is.

The 'main campus' is the central campus or where most of the classes and offices are. Notice the following:

There are lots of college kids around, and it's fun to hang out.

When you 'hang out' in a place you casually spend time there for your own enjoyment. Notice the following:

Are University of Pittsburgh and Penn State rival universities?

Universities that compete with the University of Pittsburgh in sports or academics are its 'rivals' or 'competitors.' Notice the following:

The fact that it's quiet makes it boring.

If something is not fun or interesting then it is 'boring.' Notice the following: