John talks about a writing class he taught without the use of paper. 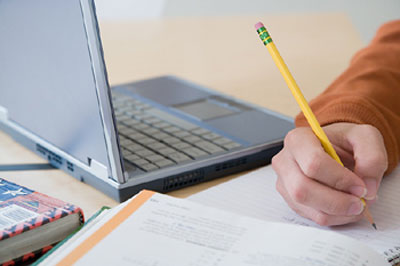 Todd: OK, John, you were saying that you taught writing in America

Todd: OK, and you said it was a paperless class.

Todd: OK, what does that mean, a paperless class?

John: Basically, it means that we didn't use paper. Right, there was no paper. All of the students' assignments were posted on a web page, so for each of their papers that they had to write, each of their essays, they could just go online and read the description of the assignment and all their requirements, and then they had two options for handing in their essays; they could either type them up and e-mail them to me or they could type them up directly in like a text format screen on the web, so that I could, I would do all of the grading for the papers like online.

Todd: OK, did you like it as a teacher?

John: It was a bit difficult cause it takes a lot to get used to reading everything on the screen, and it's, actually as far as like marking papers and grading them, it's easier for you because you can just highlight something and make it red and be like, you know, red needs spelling or whatever, and it's much quicker than like circling it and writing "spelling" once you get in the habit of doing it with the mouse and have your color skeem worked out, it goes very quick, and if you want to do a comment you can just, you know, change the font or the size, and type directly in the text, and they know, "oh well, here's John's comment."

John: Most of the students liked it, but there was a small majority that, you know, usually when they were late, or whenever they wanted to just like slip a paper under my door, and they couldn't do that, because you know they would, I would know if their paper was late because you know, it wasn't, the computer doesn't lie. It was logged in at this time and you know sent to me, so "yes it was late!" They couldn't, you know get around that kind of paper trail.

Todd: So, you're a writer, do you think it actually helps students to do this stuff on computers or should you go back to the pencil paper method?

John: I think it is important to be able to do both. I think that's the most important thing about being a writer is being able to be versatile and go in different directions and write in different forms, but probably as far as tools go these days, it's more important for students to be able to compose on a computer, because most likely that is what they'll be doing most of their writing.

Instead of writing their essays on paper, the students go online to do it.

When you go on the internet you are 'going online.' Notice the following:

The students have two options for handing in their essays.

When you 'hand in' a document you give it to your teacher or superior.  Usually you must hand something in by a specific deadline. Notice the following:

get used to or get in the habit

It is difficult to get used to it at first, but it gets easier once you get into the habit of doing it.

When you become accustomed to something or adapt to it you 'get used to' it.  When you do something repeatedly without thinking too much about it you are 'in the habit' of doing it. Notice the following:

get around or paper trail

The students can't get around that kind of paper trail.

To 'get around' something is to avoid doing something that you are supposed to do without consequences. A paper trail is evidence of something because of documentation. Notice the following:

It's important for a writer to be versatile and go in different directions.

If a writer is 'versatile' he can write about many different topics and change his style. We frequently use this phrase to mean adaptable. Notice the following: