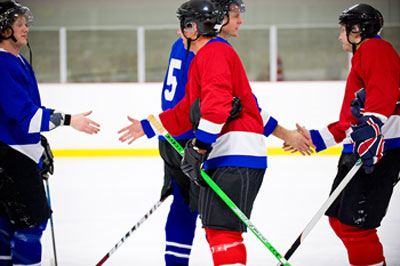 Todd: OK, Steve you were saying that you're a big hockey fan.

Todd: OK. Why? What is it about hockey?

Steve: Well, hockey is a really exciting sport. It's played on the ice. It's really fast. It's aggressive. Also, it requires a lot of skill. It's a really good sport for spectators to watch because there's lots of action. You can watch it at home with friends. Drink beer, eat pizza, and have a really good time. I also like it because I'm Canadian and it's Canada's national sport, and Canada is the best hockey team in the world right now.

Steve: That's right. We won the gold medal. We won the world championship. Both the men's and the women's teams.

Todd: Wow, that's pretty cool. In hockey, how long is the game?

Steve: The game is three twenty minute periods, but because of stoppages in play , it usually takes about two and a half hours for a whole game.

Todd: Oh, OK, and did you play in high school when you were younger?

Steve: Ah, no, I'm not that good a skater. You have to be a really good skater, but I played street hockey and floor hockey.

Steve: Well, it's pretty much the same thing. Street hockey you play on the road or on a tennis court and instead of using a puck you use a hockey ball or a tennis ball.

If you are a 'big fan' of something you really enjoy it. Notice the following:

Hockey is a very aggressive sport and requires a lot of skill.

When something is 'aggressive' it is very intense, high energy or even forceful. An aggressive sport usually involves a lot of physical contact. Notice the following:

Hockey is a good sport for spectators to watch.

'Spectators' are people that watch a sport or event.  They do not participate in the main event. Notice the following:

I'm not that good a skater.

The phrase 'not that' usually has the same meaning as 'not very.' Notice the following:

instead of a puck

Instead of using a puck, you use a tennis ball.

Here 'instead of' can be replaced by 'as a replacement for.'  A 'puck' is a small black disc that is hit along the floor in hockey. Notice the following:

big fan • aggressive • spectators
not that • instead of • puck