Rob tells a story of running into Elephants in India. 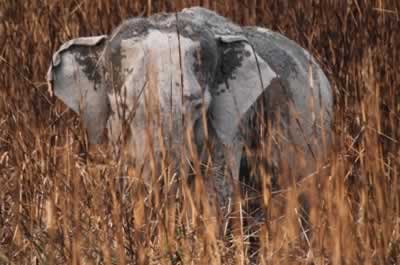 Adrienne: So Rob, tell me why you don't like elephants?

Rob: Why don't I like elephants? It's a long story. I was traveling in India with a friend of mine and one night we decided to spend the night in a national park, looking at wildlife and we were staying in a small hut. And to get to the hut we had to walk across a swamp and we had to take a boat, then we had to walk across another swamp. And after walking for about half an hour we reached the hut, all upon big lakes about 20 meters up into the air and I climbed the steps and when I got to the top of the steps, on the other side of the hut there was a huge snake about 3 or 4 meters long, a cobra.

Rob: I hate snakes. I absolutely hate snakes. So I ran down the steps and said to my friend, "I am not staying here. I can not sleep in this place" And we thought about what to do and there was a village maybe two kilometers away. So my friend walked to the village to find out whether someone could come and scare away the snake and she came back and said, "The people said there is no way, we can not scare the snake off. Do you think we're crazy? We are not fighting the snake but you can stay in our huts. You can stay in the village", so we started walking back to the village and this was about half past six, seven o'clock in the evening and the sun was going down and as we were walking through the jungle we heard all sorts of noises from other parts of the forest and there was lots of rustling noises. And "Oh I wonder what that is, there must be some animals. Wow. Cool, some animals" and then after a little while a big pig appeared in the middle of the path and we thought, "Oh, it's a pig". Pigs are not very exciting but it seemed exciting at the time and then the pig went walking off in the opposite directions and after about 2 minutes the same pig "bang" came running back in front us. We didn't know what had happened but we could still hear the noises coming slowly and slowly towards us. And after a little while the noises started getting louder and louder and louder and then we stopped. And at the side of the path in front of us we saw a trunk appear, just one trunk appear, only the trunk, off to the side of the path and then another trunk and then another trunk, so there were three trunks and I was like "Wow, elephants, great!" And then one of the elephants came out onto the path and looked right at us and then we were not so happy but we thought we're unyielding, we're tourist. So we took photos of the elephants but unfortunately my camera flashed and the elephant was very unhappy, "RRRR" but he did nothing. He just stood but we knew he was angry so we ran and hid behind a tree and after about ten minutes we thought, "OK, the elephants will have gone" so we started walking down the path again and all the bushes and the grass was above our heads and then we suddenly came to an area where the grass was only two or three feet high. So we could see a big area again and we looked over to our left and there were three elephants staring right at us, waiting for us. Maybe about 30 meters away and unfortunately at school in England they don't tell you what to do if you see an elephant. So we didn't know, should we walk past? Should we run? Should we make lots of noise? So we decided to walk. Do nothing, don't do anything suddenly. Just walk and we walked about two or three steps and there was this sudden "RRRRRRRRRRR" Boom, boom, boom, boom.

Rob: In one second we looked at each other, "Run" I was carrying a rucksack so I was running very slowly. My friend ran very fast. I was running with the rucksack and then I dropped the rucksack and I jumped into a bush. Unfortunately it was a thorn bush so I cut myself lots and three elephants decided I looked, maybe they thought I looked more delicious than my friend. So they came after me and the three elephants came charging over on top of me and I was underneath one of the elephants and it kicked me on the left leg and then I just.. and then went past making lots of noise trying to scare us off.

Adrienne: Were you OK?

Rob: I was OK that night but my leg was completely black the next day cause I had a huge bruise from where the elephant had kicked me and I have lots of cuts and bruises from the bushes and they broke my rucksack which I was very unhappy about and then we continued walking to the village which was only about 50 meters away and there was a large group of other tourists watching the elephants playing in the lane, and "How wonderful! Aren't they sweet? Aren't they lovely?" No!

We walked across swamps before we reached the place.

When you 'walk across' something you walk from one side of it to the other. Notice the following:

People there said they couldn't scare the snake off.

To 'scare something off' is to frighten it so it will go far away. Notice the following:

We heard lots of rustling noises as we walked through the jungle.

Here 'rustling noises' refers to sounds that would be made by an animal moving, maybe in some leaves. Notice the following:

We saw three trunks and were happy to see three elephants.

The 'trunk' of a tree is the thick, hard, brown part that goes into the ground. Notice the following:

The next day, my leg was completely black, and I had cuts and bruises.

'Cuts' are incisions or opening in the skin.  A 'bruise' is when your skin turns purple or blue because of an injury. Notice the following: