Trip to the Hospital

Ian talks about a time he was ill. 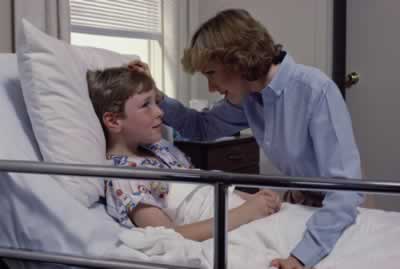 Adrienne: Hey, Ian, tell me about the time you were at the hospital.

Ian: What, the first time I went to the hospital?

Ian: Mm, but there's more! On my 18th birthday, I had like a lump in my throat, and I couldn't breathe properly and again my mother phoned the doctors and I went to the hospital again and my right lung had collapsed

Ian: I know. I spent about 8 days in hospital and it was is Wales. I always remember being in Wales because I had problems understanding the doctor's accent, and then, are you ready, there's more

Ian: Again when I was 20 years old I was at university in Leeds, and again I had a lump in my throat and I had problems breathing. I went to the hospital and the same thing again. My right lung had collapsed

Ian: Yes, but this time, because we were in a big city, they had more sophisticated medical equipment and they put a syringe, made a very small hole in my chest and put the syringe into my lung and drained away the excess air and my lung was inflated again.

Adrienne: Did it hurt?

Ian: Not as much as the first time. And I only spent a day in hospital and then they sent me home, but there's more. A week later I had the same problem, a lump in my throat, and I had problems breathing and so I went to the hospital again and my right lung had collapsed again, for the third time, so this time the
doctors decided they had to do a bigger operation to make sure that this wouldn't happen again so I was
at hospital for two weeks and they cut away the top part of my lung, and stitched me back up and now my lungs are absolutely fine. I've had no problems since and I'm doing lots of running and I feel much better,
but I don't want to have the same thing again. Ever!

Adrienne: I hope you don't either. That's amazing!

Ian: I know. The thing is, my uncle and my father had the same problems so it's probably in my genes, in my families genes, that we have this. It's a common family problem, but anyway, now I am OK.

Tell me about the first time you went to the hospital.

We use the phrase 'first time' to talk about the first experience that we had with something. Notice the following:

The doctor decided I should go to hospital and I had my appendix out.

Your 'appendix' is a part of your body. It is a tube in your abdominal area that has no known function, but can become infected. Notice the following:

My mother phoned the doctors.

In this case 'phone' is used as a verb, meaning 'to call someone using a telephone.' Notice the following:

I always remember being in Wales because I had problems understanding the doctor's accent.

Your 'accent' is the sound or the tone of your voice when you speak.  People from different parts of the world, even though they might speak the same language, have different accents.  There are usually many different accents within the same country. Notice the following:

Hospitals in the big cities have more sophisticated medical equipment.

In this case 'sophisticated' can be replaced with 'modern' or 'advanced.' Notice the following: