Gloria talks about her dog. 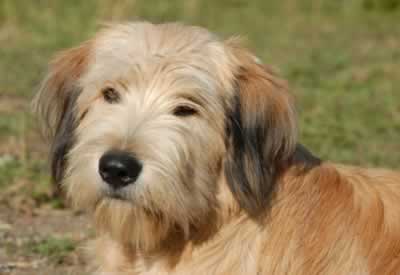 Todd: So, Gloria , have you ever had any pets?

Gloria: Yes, I have. In fact, I still have one in America right now.

Gloria: Cruiser has blond hair like me, but he has dark brown eyes, and he still thinks he's a puppy but he's 11 years old and he, I think, is absolutely the best dog in the world.

Todd: Wow, what kind of dog is he?

Gloria: He is a Griffon. We got him at the humane society, so he had a little note with him saying he's a Griffon, which I really don't know a lot about. It's like a miniature wolf hound.

Todd: Have you ever had a cat?

Gloria: Yes, my first pet was a cat.

Todd: Uh-huh. What was your first cat's name?

Todd: What kind of cat?

Gloria: Just a yellow cat. I think some of my earliest memories were with Sally chasing her around the house, and they're not really related to anything, just running around the house chasing the cat.

Yes, I have a pet; in fact, I still have one in America right now.

The phrase 'in fact' is used to give a specific example for what we are talking about. Notice the following:

When we use 'like' in this way we are asking for a description of something. This usually refers to personality or maybe how something looks. Notice the following:

Cruiser is a miniature wolf hound.

If something is 'miniature' is a smaller of what's normal.  In this case, a very small copy of a wolf hound. Notice the following:

What kind of cat did you have?

In this case 'kind' refers to type or, more specifically with animals, the breed. Notice the following:

One of my earliest memories with Sally was chasing her around the house, and they're not really related to anything.

If one thing is 'related to' another there is a connection between the two things. Notice the following: