Leo talks about this famous bird from New Zealand. 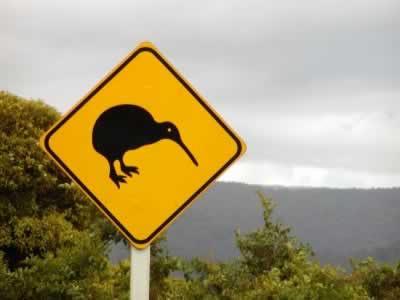 Todd: OK, Leonard, now, when most people think of Kiwi, at least Americans, we think of the fruit.

Todd: Oh, really! OK. But, uh, people from New Zealand are called Kiwis not because of the fruit I take it.

Leo: And so Kiwi, the pronunciation of Kiwi K-I-W-I KEE-WEE, Maori has similar pronunciation to the Japanese language, ah, ee, uu, eh, oh. They pronounce the vowels.

Leo: A kiwi is a nocturnal bird, which only walks, it doesn't fly.

Todd: OK. So nocturnal means it only comes out at night.

Leo: Right. Right. And in the deep forest. Actually, you'd never see a Kiwi if you went to New Zealand, unless you went to the zoo.

Leo: And the brown Kiwi is the most, uh, rarest of them all. They're only I think, there are less than one thousand brown kiwis left.

Leo: It can only be found in New Zealand.

Todd: Ok. OK. maybe I missed it but can it fly.

Leo: It can only walk.

Todd: Wow, so it only comes out at night...in the deep forest and it can't fly.

Leo: You'd be surprised. If you go to New Zealand, uh, there are over twenty different types of birds that walk.

Todd: Really! That's fascinating. Well, thanks for telling us about the Kiwi.

When people think of Kiwi, at least Americans, they think of the fruit.

We use the phrase 'at least' like this to give more specific information to a general statement.  The sentence isn't talking about all people, it is specifically talking about Americans. Notice the following:

People in Japan think of the Kiwi as a fruit, as well.

'As well' means the same as 'also' and 'too.' Notice the following:

There are less than one thousand brown Kiwis left.

The phrase 'less than' is used with a number to mean the same as 'fewer than.'  It means that the number of Kiwis left is below 1,000. Notice the following:

The Kiwi is a nocturnal bird, so it only comes out at night.

Something that is 'nocturnal' is most active during the night. Notice the following:

In New Zealand, there are over twenty different types of birds that walk.

When 'over' is used like this it means 'more than' and is used in combination with a number. Notice the following:

at least • as well • less than
nocturnal • over