Adrienne and Mike talk about trick-or-treating on Halloween. 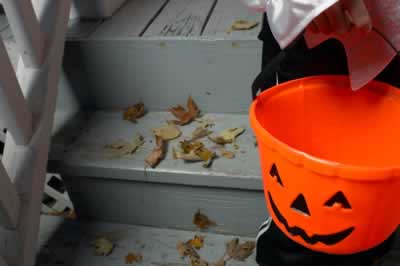 Adrienne: I actually like it. It's a fun holiday for kids especially because you get to dress up in costumes and you get lots of candy if you go trick-or-treating. I have a lot of good memories. of Halloween growing up.

Adrienne: Trick-or-treat is when you go, you dress up in your costume on Halloween and you go door-to-door ringing doorbells, knocking on doors. One person comes to the door, you say, "Trick-or-treat" and usually these days they give you a treat which is candy or apples or something like that but in the older days, you could, if they didn't give you a treat, then you could play a trick on them or they could play a trick on you, instead of giving you a treat, something like that.

Mike: I always thought that it was they performed, the person at the door performed some kind of trick for the kids because they didn't have candy to give, but I could be wrong.

Adrienne: Yeah, I don't know exactly. It's one of those three options.

Todd: Yeah, I think it's you play a trick on them.

Todd: You throw trash against their house.

Todd: Dog pooh in the paper bag on fire. On fire!

Todd: OK. That's good. I'm glad because now we can diverge. What was, what were your costumes when you were younger?

Adrienne: Ah, I had so many. My mom was a seamstress so she used to make a lot of my costumes. I designed them and she would make them for me and my sister so one year I was bat girl, another year I was Wonder Woman. Another year I was Princess Lea from Star Wars, I was a rainbow and a clown and a cat, and a witch and everything, basically that you're supposed to be for Halloween I was.

Todd: A lot of heroines in there.

Todd: Mike, how about you?

Mike: I was goat boy.

Mike: I was always goat boy because there...

Mike: Yeah, we, I couldn't afford to get a decent costume every year.

Todd: So how were you goat boy? What did you look like?

Adrienne: Where did you get goat boy from?

Mike: They just put some sort of, they put a lot of trash on me, and forced me to eat a can. It's OK.
I got lots of candy but then the other kids would beat me up and steal it from me. That's OK.

Mike: Well, you know. That's all right. It toughened me up when I got older.

Halloween is a fun holiday for kids because they get to dress up in costumes, and get lots of candy.

When you wear clothes that you don't wear on normal days you are 'dressing up.' This phrase is used to describe wearing a costume or putting on fancy or formal clothes. Notice the following:

Do you have American-style Halloween in Canada?

I'm glad because now we can diverge.

Used like this 'diverge' means to do something different, not the same as what people did in the past. Notice the following:

My mom was a seamstress, so she used to make a lot of my costumes.

A 'seamstress' is a person who sews, usually for an occupation. Notice the following:

What did you look like as a goat boy?

The phrase 'look like' refers to someone's appearance and physical characteristics. Notice the following: