Eli talks about her love of video games. 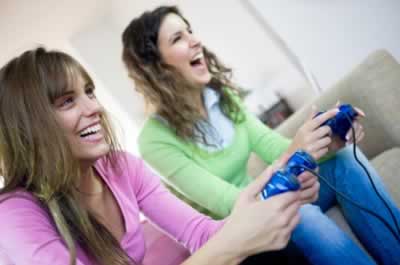 Todd: So, Eli, you're young and you're into Manga, so I take it you like video games?

Eli: Mm-hm, I do very much. It's my other hobby. Um, almost an obsession sometimes. I think my friends get quite worried about me sometimes, the amount I play, but yeah I've always since I've been little liked computer games. I think my dad on his old macintosh forced us into it originally, so I blame it all on him, but that sort of developed into obviously in my field that I do which is animation. It's very close connected to it, and I'd like to maybe work making computer games one day, uh.

Todd: What's a really good game? What do you think is the best game?

Eli: My favorite games are I think a split between two, the Final Fantasy series, which is a spread of lots of different games which are RPG which are role playing games, where you are, you're a character, or party of characters and you run around talking to people, discovering things, fighting battles, lots and lots of puzzles, lots of secrets. That's what I like.

Todd: Is the setting now or the future or the past?

Eli: The setting's always in some fantasy world, but you don't know about. That's kind of, that's one of the nice things about computer games, it's almost escapism. You can escape the reality of the real world and go and run around in some fantastical world I mean, now that the graphics and computer games are getting so advanced it really does feel like your going into a new world of your own actually,and that you're there running around, so yeah, that's great and I think my other favorite game would have to be the SIMS series, which is,
started with SIM city, which is a little city building game, where you're the mayor of the city.

Todd: You're the mayor!

Eli: You're the mayor of the city and you have to build up your city over hundreds of years and advance it, and then from that they made the SIMs which actually goes into the houses and you control the lives of the little SIM people in the houses. It's almost like playing dolls houses, but very, very advanced and they have their own wants and needs and they fall in love and they go to work and it's basically just determining the destinies of your little character and furnishing their houses at the same time, which is always fun.

Todd: Wow, what a game! So actually, shows how old I am, you said, "computer games!" So you don't say video games anymore?

Eli: Well, the SIMS and SIM City, I mean the first SIM City series I played on, probably the Mac had only just got a hard drive, um, really old when I was about, sort of seven or eight, even younger than that, so yeah, those PC games, mac games, and also video games, video games are Play Station, the ones that you play on the TV.

Todd: Which to you prefer a play station or an actual arcade game to play on?

Eli: Uh, I never actually got into arcade games, cause you got to put money in to play them so, and I don't
think my, our parents ever wanted us to sort of waste money like that so.

Todd: What kind of player do you have: a play station?

Eli: I have a play station, and a Dreamcast, and an X box, and a Game Cube, and an N64 and a Gameboy

Todd: Wow, I don't even know what those are.

Are you into video games?

If you are 'into' something it is your hobby and you really like to do it. Notice the following:

If one thing is 'close connected' to another there is a relationship between the two things or they are similar in many ways. It is actually more grammatically correct to say 'closely connected.' Notice the following:

I play Final Fantasy, which is a role playing game.

When you 'role play' you take on the personality of another character or you create your own character different from yourself. Notice the following:

The nice thing about computer games is that it's almost escapism.

'Escapism' is escaping from reality through entertainment or role playing. Notice the following:

'Almost like' is the same as 'similar to.' These two activities have a lot in common. Notice the following: