Steven talks about his travels in Europe. 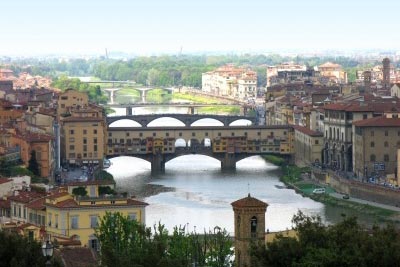 Steven: Ah, it's great, so basically backpacking, but going between countries by train with some friends. I travelled with some friends, so you can buy one ticket. It's called an interrail ticket and you can visit any country in Europe using this one ticket. They last, well, the ticket I had lasted one month.

Steven: So, we went to France and we travelled to Italy and then we went down to some Greek islands. Also we went to Amsterdam in Holland.

Todd: Wow! What did you do in France?

Steven: In France we were on the South Coast, South of France. What did we do? Well, really we spent our time on the beach mainly playing water sports on the beach and just sunbathing and relaxing. (Cool) That kind of thing. Yep.

Todd: Ah, did you make it to Sardegna?

Steven: Um, I think my favorite city was probably Florence in Italy.

Steven: We were lucky, We met some students, some British students who was studying Italian, and they had their own apartment on the hills, one of the hills in Florence, and they invited us to their apartment, so we stayed with them, and they had, they had built up some local knowledge. They knew about some local restaurants so they took us to a very traditional, whatchucallem, piatza, uh pizza restaurant, pizze, pizzu (Pizzeria!) Thank you. Yes. Um, and I think it was the best pizza I've ever had. It was wonderful.

Steven: After some tequila. It was great.

Todd: So, Florence was your favorite city. Was Italy you're favorite country?

Steven: Ah, I think so. I love the Tuscany area. Yeah, it's absolutely beautiful. Hard to beat.

Todd: Well, wish I could do it again.

You can buy one ticket, called an InterRail ticket, and you can visit any country in Europe.


An 'InterRail ticket' is available to European residents and allows the unlimited travel between specific countries in Europe for a certain period of time. Notice the following:

The ticket I had lasted one month.


Here 'last' refers to the duration of time that something continued. Notice the following:

built up some local knowledge

We stayed with some British students, who had built up some local knowledge.


You 'build up some local knowledge' by living in a place and learning your way around and how to do the things that you need to get done. Notice the following:

We played five-a-side football at a communist festival, which was quite a unique experience.


'Five-a-side football' means football or soccer with five people on each team. A 'communist festival' is an outdoor party with people who support communism. Notice the following:

You did that? How bizarre.


Something 'bizarre' is really weird. Notice the following: