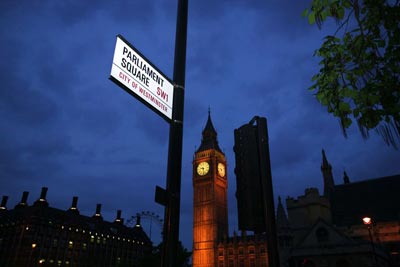 Todd: Steven, if I go to England, and I can choose between Manchester, and Liverpool, (right) and London (right) those are the only three major cities I know, which one would you say is the best?

Steven: Out of those three, well I would have to say London. I've never actually been to Liverpool so I can't comment on Liverpool. I have spent a short time in Manchester before. Uh, I enjoyed Manchester. It's a very lively city. It has lots of good clubs and it has some interesting shopping, there's some interesting shopping in Manchester, uh, there's some good markets, but I've actually lived in London and I feel like my heart is in London. I feel like a Londoner, and London has everything to offer. Again if you, I'm not particularly into clubs but if you're interested in clubbing then there are great clubs. There are some good pubs. Um, it has the theatres, hundreds of cinemas. The architecture is fantastic.

Todd: Well, what about in London there's many parts, right, so if I do go to London what part of London is the best place to go and stay.

Steven: Um, it depends on what you want to do. If you want to, if you want, if you want to see the sites then well you'd want to, you'd obviously want to stay centrally, I'd have thought. Um, most of the famous landmarks are in the center. However, if you're going to spend some time living in London, and if you want to experience maybe a more, just an ordinary side of London, then you can live a bit further out. I actually lived in the south of London, just below Brixton, maybe you know Brixton. I lived in an area called Strettom, and the atmosphere there is very lively, also very lively. I enjoyed South London. In the past South London had a bad reputation. People didn't think South London was a very nice place to live, but over the last few years the quality of life in South London is improved, has improved a lot. More and more people are moving in to South London and, well, consequently, as a result the prices are going up and up and up, but it's actually a nice, a nice area to live in, in South London I think.

my heart is in

I've actually lived in London, and I feel like my heart is in London.


You can say that your 'heart is in' a place that you feel most connected to. Notice the following:

If you're interested in clubbing, there are some good pubs.


Usually, 'clubbing' refers to going to dance clubs. A 'pub' is a bar. Notice the following:

In the past, South London had a bad reputation.


A person or a place with a 'bad reputation' is known to be either dangerous or bad. Notice the following:

Over the last few years, the quality of life in South London has improved a lot.


The 'quality of life' you have in a place is how well you can live there. Notice the following:

More and more people are moving in to South London, and consequently, the prices are going up and up.


'Consequently' is another way of saying 'as a consequence' or 'as a result.' Notice the following: