Rina talks about being from two different cultures. 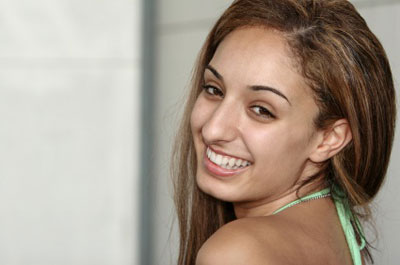 Todd: So, Rina, now you are Lebanese (Mm-hm) and you grew up in a very small Canadian town.

Rina: In the beginning it was very hard. My dad was very strict. I wasn't allowed to work. I had to fight to have my first job at 19.

Rina: At 19. I wasn't allowed to have a boyfriend. I had to fight for that one two, and I had my first boyfriend at 18. Wasn't allowed to go out. First high school dance was grade 11. So, I hated it in the beginning. I was, but now I appreciate it and I know where my parents were coming from.

Todd: So, it this the standard Lebanese family type culture where daughters are not allowed to work?

Rina: Ah, yeah, my dad had basically believed that if I went out and worked I would, you know, be hit on by guys. It just wasn't a place for his daughter, and typically before, yeah, women don't work. They stay home. They took care of the kids. They, you know, it was a typical patriarchal society and my dad was very, very strict, and I spent a lot of my childhood pushing away my culture because of that.

Todd: And how do you feel about your culture now?

Rina: I'm very, very proud of it. I love it. It's nice to be different and I'm glad I get that chance to do that. Um, the only thing, when I was in Lebanon, it was hard as well because people didn't see me as Canadian, and they didn't see me as Lebanese You know I was, a lot of people didn't talk to me because of it. I went there and a lot of people shunned me basically, so.

Todd: So even though you had no language barrier at all cause you speak Lebanese?

Rina: Yeah, well, they have their, they have their image of what you know, what Western society is like from movies and, you know, because you know I have my tattoos, they thought I was just basically Satan's spawn,and because I wasn't running around like a tramp, they thought well, "What is she is doing? What is she supposed to?" it was just the worst of both world's really.

Rina: Yeah, so because, they do, they have, and actually I have to specify this: I was in a village. Like, both of my parents are from villages

Rina: In Beirut, it's different, but when I was in the villages, where I stayed the majority of the time, it was like that, but I got, I made my little older ladies love me, but they were talking to me at the end, having coffee with me while I smoked my cigarettes, yep, yep.

My dad was very strict. I wasn't allowed to work.

When you talk about 'strict' rules, this refers to rules that are enforced carefully and with no flexibility.  'Strict' also implies very conservative ideas.  Notice the following:

It was a typical patriarchal society.

A 'patriarchal' society is a society where the men have the most power.  Notice the following:

I went there and a lot of people shunned me.

If you 'shun' someone, you stay far away from them.  This could be because you don't like them or because you are embarrassed by them.  Notice the following:

They were mad at me because I was too Canadian.

To be 'mad at someone' is to be angry with him.  Notice the following:

They thought I was just basically Satan's spawn.

In this case 'spawn' is the child or offspring of Satan.  This word usually has a negative feeling.  Notice the following: