Rina talks about her town in Canada. 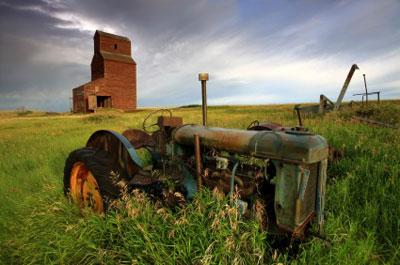 Todd: So, Rina, where are you from?

Todd: Now, Saskatchewan, that's a part of Canada that doesn't have a lot of people, right?

Rina: There's, in the whole province, there's a million people.

Rina: In all of Canada there is only 33 million, so yeah.

Todd: And you only have one?

Todd: Yeah, actually, is there any major Canadian cities in Saskatchewan?

Rina: Well, the capital is Regina. (Really) Yeah, if you've heard of that.

Rina: But I live in, right now my parents live in Saskatoon.

Rina: And that's, my town is between Regina and Saskatoon, called the midway town.

Todd: What's it like growing up in a very small rural setting?

Rina: It was awesome. My parents, because they immigrated from Lebanon were very strict with me so I really wasn't allowed to do very much until I was about in grade 11, when my brother was old enough to come with me, but it was, once I was able to start going out and going to dances and things like that I loved it.

Todd: Oh, really, even in your small town?

Todd: Sounds good. So, in all of Canada, like when you go back and you settle down and you live in Canada, do you want to live in Saskatchewan?

Rina: No, it's not, it's, I've developed a lot more since I was that age and it's just not the same anymore. I'd like a bigger center, preferably Vancouver, or Montreal, on one of the coasts. Yeah. So.

Rina: Because I'm a little jaded. When I was, in 94, we went to Niagara Falls, and we drove through Toronto and it was just so, it looked so busy and smoggy and just crazy, and so I never really liked it since then. I have that image in my head still of that.

Todd: Yeah. I don't like Los Angeles. OK, well thanks.

Once I was able to start going out and going to dances and things like that I loved it.

'Going out' refers to going to a place to be social.  This can be dance clubs, social events, parties or bars.  Notice the following:

When you go back and you settle down and you live in Canada, do you want to live in Saskatchewan?

When you choose a place to live and start to make a life there you are 'settling down.'  This usually implies a house or apartment, a job, a car, and other things that indicate a commitment to a place.  We also use this to talk about marriage.  Notice the following:

I've developed a lot more since I was that age.

To 'develop' is to become more mature and responsible, more like an adult.  Notice the following:

Because I'm a little jaded.

If you are 'jaded' about something, you feel negative about it, either because you exhausted or worn out by it or because you are skeptical of the outcome.  Notice the following:

It looked so busy and smoggy.

A place that is 'smoggy' has a lot of pollution and looks cloudy or foggy from the contamination in the air.  Notice the following: