Nitiya asks about the police and race in America. 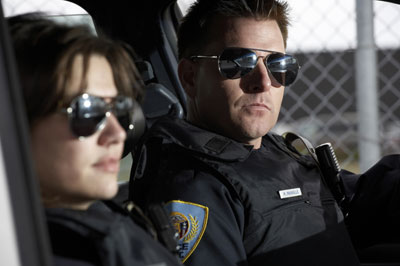 Nitiya: OK. Can you actually talk a little bit about police in America? How much does the civilians trust them or what beliefs you have about them?

Todd: Ooh, that I guess would depend on where you live. I grew up in a pretty small town. I'm white, Caucasian, and I think that most Causasian people trust the police pretty much 100%. They think that they're there to serve and protect, but unfortunately minority groups, blacks or African Americans and Hispanic people, Asian people sometimes don't trust the police.

Nitiya: OK, why do you think they don't trust the police sometimes?

Todd: Well, one is because the police probably don't treat them fairly. Often they live, some minority groups, live in poor areas, and in the poor areas there might be higher crime and the police probably have more stress, and they have they're more ... defensive, and as a result maybe they behave poorly, or they don't treat certain minority groups equally. They're more suspicious, and as a result, sometimes bad things happen.

Nitiya: So basically, most of the people do trust, it's like that.

Nitiya: OK, then and there is one more thing I want to ask you, about this police thing, so African Americans don't become police?

Todd: Oh, no, it's quite often that African Americans do become police.

Nitiya: OK, so you do have black people, who are police?

Todd: Oh, of course and you have, we have minority group. Usually where you have distrust with the police is the major larger cities, and it's a race thing, that has to do with race, but it also is an income thing, where usually the lower income people often feel like they're not treated, you know, fairly I guess. I mean what is it like in India? Do you have complete trust of the police?

Nitiya: I guess no, but it depends exactly on the city, as you said. The smaller cities, I think the conditions are very bad. I don't think, and it's not that fast, like in America, you dial a number and there are police there in two minutes, but that's not the way in India. Crime finishes and then they appear. Yeah. It's like that.

Todd: OK, well, nice talking to you about that.

'Minority groups' are groups of people who are in the racial, religious or ethnic minority where they live.  Notice the following:

They're more suspicious and as a result sometimes bad things happen.

'To be more suspicious' is to really think that something bad is going to happen and look at people like they are going to attack you.  Notice the following:

The police are always nervous and edgy around them.

To be 'nervous and edgy' is to be worried and jumpy around certain people, feeling like something bad is going to happen.  Notice the following:

The police might use violence against them, or suspect that they are criminals, when they are just a good ordinary citizen.

'A good ordinary citizen' is a normal person who follows the laws and doesn't make trouble.  Notice the following:

It depends on the city, as you said.

You can use the phrase 'as you said' to repeat what someone said earlier in the conversation.  Notice the following: