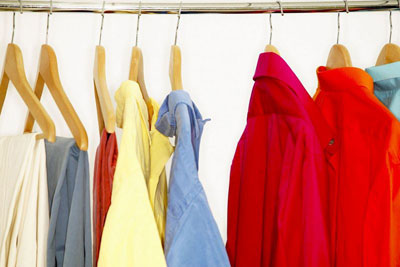 Todd: Hey, Marion, I like you outfit. Nice jeans and T-shirt.

Todd: Where did you get it?

Marion: Actually, my T-shirt is a hand-me-down from a friend of mine who's leaving so she gave me some of her clothes.

Todd: Oh, really. Ah, OK. See, that's cool, like if I know the person who wore the shirt before, I'll wear it, but I will never go to a second hand clothing store or a used clothing store (Really) I think that's disgusting.

Todd: Well, I mean, you don't know who wore it before.

Marion: But they're washed, Todd. You know!

Todd: Yeah, but, OK, first of all, what if the person who wore it was just the type or person you really hated. There's something about the person that you just really didn't like, and then, now you're wearing that person's clothes. Doesn't that disgust you?

Marion: No, do think a person's personality rubs off on their clothes (No, but) and then it survives the wash cycle in your washing machine?

Todd: OK. Right. Right. I see what you're saying, but I'll put it to you this way. Imagine that you work with somebody.

Todd: Ok, at your job, is there somebody that you don't like.

Todd: OK, now imagine that there's a clothing bin and people can put clothes in there and you see a shirt and you like it, and you're just about to take it and someone says, that's that persons shirt. Would you still take it?

Todd: Right. Yeah. I mean, I don't know. I guess it's good to have second hand clothes if people don't have anything, you know for charity and things like that.

Marion: Yeah. Well, actually, when I was in college, I didn't have very much money, so the only clothes I could buy were second-hand clothes so I actually really got to like going around the charity shops and finding clothes that I really liked, so nothing that was following the trends of the moment, but in college that really doesn't matter. I think it's better to wear something if you feel comfortable in, and I think there's a real sense of achievement when you find something that you've wanted for God-knows-how-long, for example, I found a brown suede jacket one time in a charity shop, and I thought, "Oh, my God. This is exactly the type of suede jacket that I have been longing for", but I could never afford that jacket at full-price, even at half-price in a normal shop. I could never have had it, so actually most of my wardrobe at home is second hand clothes I would say, and I love it. I will go to a second hand clothes shop before a normal clothes shop any day. It's so much more fun.

Todd: Well, that's very interesting. You have fun shopping at those stores

Actually, my T-shirt is a hand-me-down from a friend of mine.

A 'hand-me-down' is clothing or a toy given to you by someone you know.  Usually younger children in families receive hand-me-downs from their older brothers and sisters.  Notice the following:

I will never go to a second-hand clothing store.

If something is 'second-hand,' it has been used by someone before you, usually by someone you don't know.  These are items you buy in a store, like clothing, furniture, shoes or accessories.  Notice the following:

Do you think a person's personality rubs off on their clothes.

To 'rub off on' someone or something is to transfer a personal characteristic to that thing.  For example, if you start using a phrase that your friend uses, then she is rubbing off on you.  Notice the following:

I wouldn't want to be beholden to that person if I don't like them.

If you are 'beholden' to someone, then you owe him something or are in debt to him in some way.  Notice the following:

This is exactly the type of suede jacket that I have been longing for.

When you 'long for' something, you really want it.  Notice the following: